A motorcycle represents freedom: the freedom of the open road, the freedom of speed, the freedom to go. Bikers are cowboys reinvented. They aren’t content to go the way of the package tourist. They see things for themselves and they form their own judgments. It’s an attitude as much as a mode of travel.

Few people stop to consider the advantages of motorcycle travel in foreign countries. In most places you can rent a scooter without a motorcycle license. They’re easy to operate, fast and efficient, and more than enough for the roads you’ll find. In Vietnam you can also rent a Russian Minsk, the 125cc workhorse of the former Communist world. It’s a noisy, gas-guzzling beast of a machine that farts clouds of blue oil smoke thick enough to befuddle any pursuer — something to keep in mind if you tend to hang out in a lot of military dictatorships. In a land of scooters, it’s also generally the biggest bike on the road. The Minsk was my favourite mode of transport when I was hanging out in Hanoi back in 2002 (until I got deported, but that’s another story…).

Midsummer Hanoi smothers beneath a throbbing heat haze. Beads of moisture condense and trickle down a glass of syrupy iced coffee just as the sweat rolls down your back. The narrow streets of the old town are choked with scooters and bikes, and baggy-trousered old ladies in conical hats balancing a pole dangling two pots over a shoulder. The noise — the shouts and honks and roaring exhaust — creates an aural blanket that hems you in like the heat. It’s oppressive. It’s stifling. And it made me long for wide open spaces. Motorbiking in Hanoi isn’t for the faint of heart. The streets are a solid mass of humanity whose movements are seemingly linked like those of a school of fish. It’s a chaos of moving metal with no apparent rules, save for some bizarre form of telepathy. I learned how to navigate it the first time I tried to cross the road. I waited timidly for nearly ten minutes, hoping for a break in the flow, until I finally ran out of patience and just stepped out into it and began to walk. The trick is to stare straight ahead and keep a steady pace. The traffic will flow around you like a stream around a rock. If you slow down, however, or try to dodge it in a panic, they’ll get confused — and you’ll get flattened.

The same thing happens when you decide to hop on your own heap of mechanized mayhem and join that flow. I’d only ever driven a motorbike a handful of times, and of course I didn’t have a license for one. But hey, how hard could it be? I found a reputable bike shop, slipped the proprietor some cash, and I was off with a roar and no questions asked.

I have to admit it was a little unnerving at first. Every time I stopped at an intersection, I was handlebar-to-handlebar with someone else, totally surrounded on all sides by revving engines two inches away. To even shift in my seat meant brushing up against someone. And then the light would change, and we’d be racing like mad in one vast polluting pack.

Navigation brought its own unique set of challenges. A left turn down a side street meant gradually edging head-on into the onrushing stream. Unbelievably, the traffic always parted Red Sea-magically and made way before me. Within half an hour I was racing through the city streets like Luke Skywalker on an Imperial Speeder Bike (if you didn’t grow up with Empire Strikes Back, I feel sorry for ya!).

Check out this youtube clip, you’ll see what I mean:

It takes a while to get beyond the urban sprawl, but once out of the city you can open the throttle and feel the breeze in your helmet-less hair. This rural Vietnam is a world away from the scams of Hanoi. Pale green rice paddies wilt limp in the heat, backed by steaming jungle hills and jagged karst. You have no place to go, no agenda, and nothing but time. And the people you’ll meet are just as un-rushed. A roadside group of uniformed schoolchildren stop to point at you, jaws agape. When you pause at a roadside stall for pho or iced coffee, you’ll be greeted by shy surprise, followed by curiosity and giggles. You’ll even be waved off with a laugh and a joke when your friend tries to photograph a military helicopter base. That would never happen in the city!

Ahh, the Minsk. It really does set you free. You can daytrip lightly and reach untouched places just outside even the largest “tourist” destination, or you can strap on the saddlebags and wander the map wherever the Road Gods take you. And you can even cruise the highlands of North Vietnam in a Chairman Mao cap. 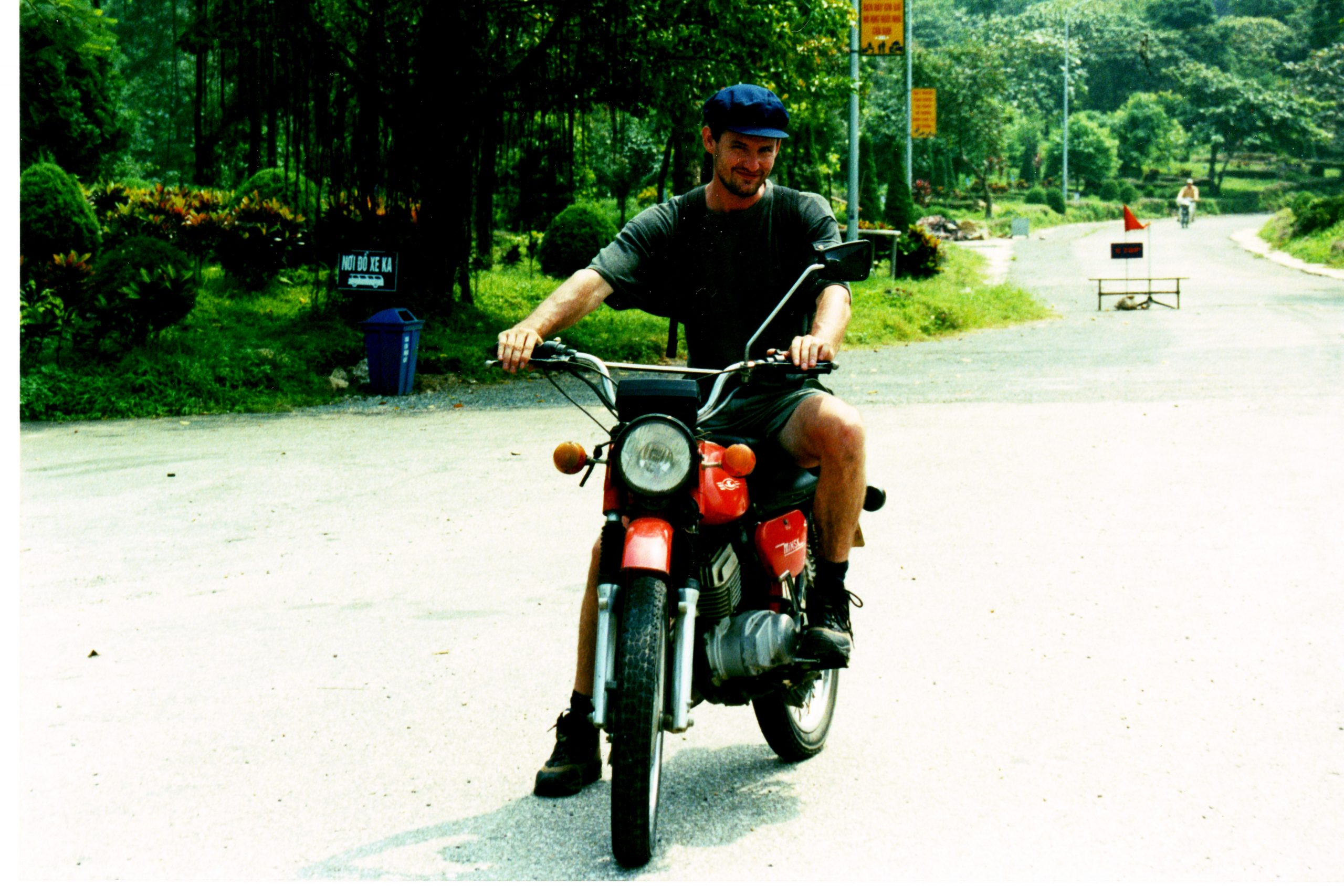