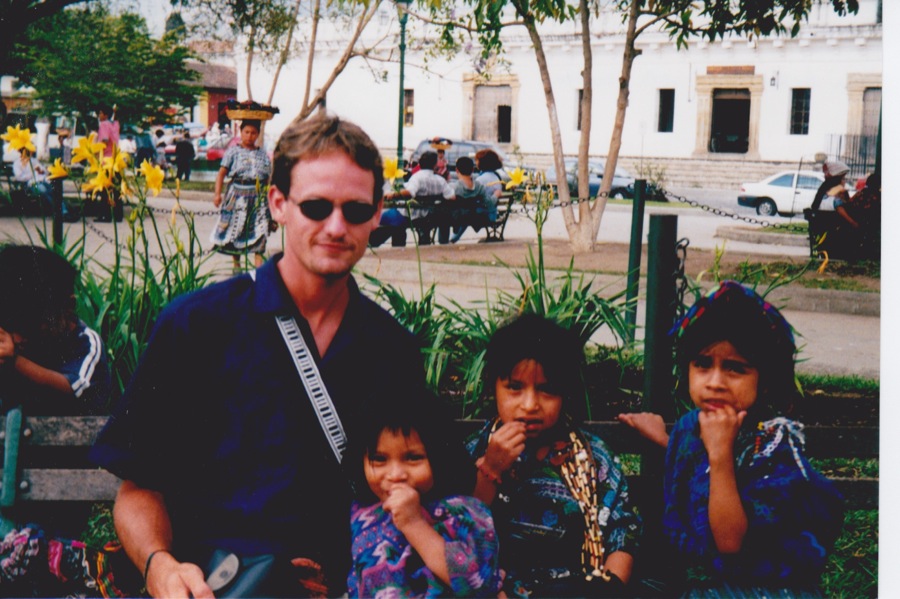 Antigua in the highlands. Mayan Indian women and children strolled through the Parque Central dressed in brightly patterned traditional embroidery. Round baskets, balanced on their heads, were filled to overflowing with vibrantly stitched artisanias for sale: bracelets, wallets, change purses, necklaces, scarves, shirts and more. Five boys sold roasted cashews from burlap bags strung around their necks; they carried a metal scale slung over one shoulder with twine.

The vendors flowed through the plaza with choreographed precision. A cashew vendor waltzed for a moment with a shirt seller, while a bracelet seller cornered a herd of tourists and another bracelet seller moved to cut in. The backdrop for their performance, the stage set, was the slowly eroding town: relic of a powerful colonial empire; shredded fragment of a dream barely remembered. 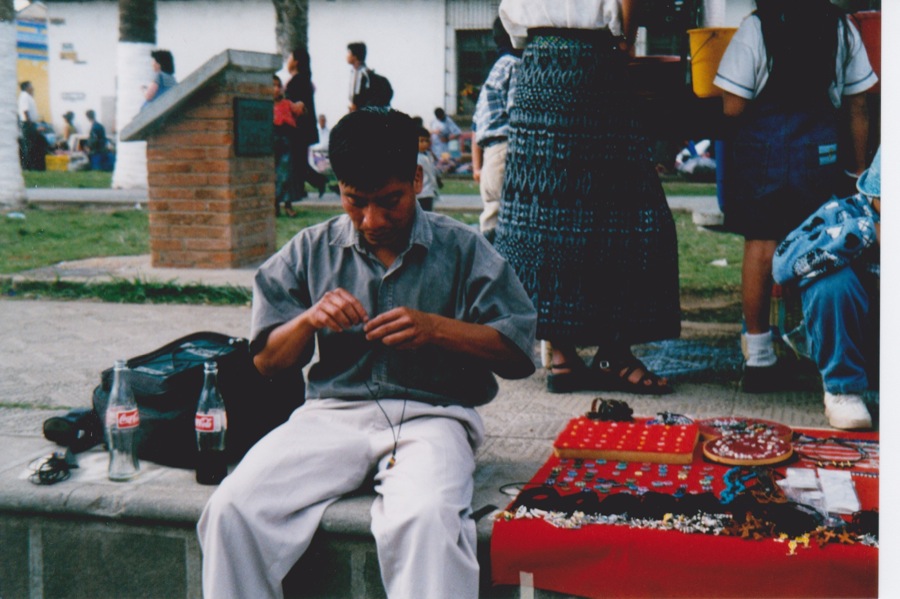 The dignified weight of history pervades Antigua. It was founded in 1543 as the capital of Spanish Central America. Its halcyon days lasted 233 glorious years, until an earthquake pulled the rug out from under it. The politicians moved to Guatemala City in the valley. Antigua took a quiet stance somewhere between past and present.

To sit at the center of the plaza was to be instantly reminded of Time. On the east side, the carved figures of saints on the Catedral de Santiago hovered each evening in backlit auras, a reminder of a moral code that’s eroding like the buildings. On the south was the Palacio de los Capitanes, a dignified stone building with a stately double arcade. It was once the center of government, headquarters of the Captaincy General until the quake. Now it’s nothing. It sits on the edge of the plaza like a befuddled pensioner, watching the flow of life and wondering how things changed so quickly, so completely. It basks in memory, its deeds forgotten by the young.

The backstreets of Antigua are scattered with small plazas and colonial churches, their size and number a testament to the historical wealth of the city. Bequests fell like rain as newly rich conquerors laid siege to the afterlife with native gold. Their names remain in the crumbling stones, if nothing else.

It was a touristy town, but somehow I liked the place. I needed a bolt hole, an inexpensive place to stop and conserve my dwindling funds. Antigua seemed appropriate because it exuded a sense of being frozen in time. Within days it sucked me into the lazy Latin life of the plaza, into its sun-drenched lethargy, its languid conversation. History provided the underlying beat, while the bass line was the throbbing, thrumming heat.