Guatemala City lay far below me, shrouded in the valley’s pre-dawn silence, as I wound down the corkscrew highway from the highlands. My head hung in half-sleep, swaying with the motions of the van. I dozed on and off until the bright lights of the International Airport finally blazed me into wakefulness. The other two passengers climbed out. I moved to follow.

The driver shook his head. “Not you.”

We left the airport and drove through smaller, darker roads. He stared straight ahead in tight-lipped silence. I wondered briefly if it might be another attempt at robbery, a predator’s skilful culling of one sleepy straggler from the herd. I doubted it, and anyway I was too tired to care. It was pointless to worry.

We finally turned down a narrow street and drove past the hangars of several small air companies. It was a normal road with painted lines and street signs, except that small planes were parked in the driveways as though in some sort of futuristic subdivision.

There were no people in the buildings we passed. No lights. The driver stopped in front of a hangar and got out. I got out too. He took my pack from the back compartment of the van and set it on the ground, then drove off without a word of explanation. I stood in the pre-dawn silence of the deserted neighbourhood and watched as his cracked taillights faded into the empty night. White showed through red where the broken plastic had fallen away.

I seemed to be in the middle of some vast industrial wasteland. As I stood there in the dark, I felt time wobble and reality loose its grip. I sensed the beginning of another surreal experience.

I walked into the hangar and looked around, seeking a clue that would tell me what to do next. Two twin-engine planes were parked with their doors and luggage wells open. I debated firing one up and heading off on my own, but finally decided against it. A light was on in the office but no one was there. I spotted an electric kettle on the table beside a jar of instant coffee. I filled it from a bottle of water on the floor and plugged it in.

Just then tires crunched on gravel and headlights swept the hangar. I walked out with my hands in my pockets and leaned against the edge of the big doors to observe this new development. As in Nicaragua, I fully expected things to get a little stranger.

It was another shuttle van. A stout American woman in matching Tilley clothing was unceremoniously abandoned in the same way I had been. She stood watching in confusion as her ride drove away, looking remarkably like a herd animal caught in the open, sniffing the air for lions. I stepped out of the shadows. She sucked in a quick startled breath before tentative signs of relief crept to the edges of her face.

“Is this… is this the plane to Tikal?” she asked.

“I think so,” I said, with the slow cracked voice of morning. “You must be my copilot.”

She stopped in mid-stride. “What did you say?”

“I think it’s do it yourself. Kinda like a rental car. Anyway, there’s no one here.”

She flinched as a shrill whistling suddenly came from the office. “What’s that?”

Passengers trickled in as we prepared our drinks. The staff eventually arrived. We milled around sipping coffee as they weighed everyone’s baggage on a rusted old hand scale.

“Are you going to Tikal?” the woman asked me.

“I’m on a package tour. A guide is supposed to meet me at the airport.”

Most of my fellow passengers looked to be on package tours. They had an aura of timidity about them. As Martina would say, there were a lot of White Legs around.

A worker leaned out of the office door. “Please to come in.”

We formed a line in front of a chipped wooden desk and handed our tickets to a secretary, who typed a passenger manifest with our names and passport numbers on an old black manual typewriter. Sharp cracks echoed through the hangar as she henpecked the keys and struggled squint-eyed with the spelling of foreign names.

“I haven’t seen one of those for years,” I whispered.

“Is that carbon paper?”

I gave her my ticket. She handed me a boarding pass with my name freshly typed in smudged ink.

There were fifteen passengers. The staff must have known us all by sight. Even so, a stewardess would wait outside the door of the plane to tear the stub of my boarding pass when I climbed in. Things had to be done in a specific, established manner, and that was that. Like the Keeper of the Bathroom Door on the long distance bus in Panama, they took it all very seriously.

It was nearing departure time. The closest plane had been loaded with luggage, but it was still sitting in the hangar. A long bar had been attached to the nose wheel. I waited for one of those little electric carts to come and move it. Needless to say they didn’t have one. Three burly guys in t-shirts lifted the bar and pushed the plane out onto the road. Looks of surprise turned to mild horror when the workers jump-started the plane with a car battery. 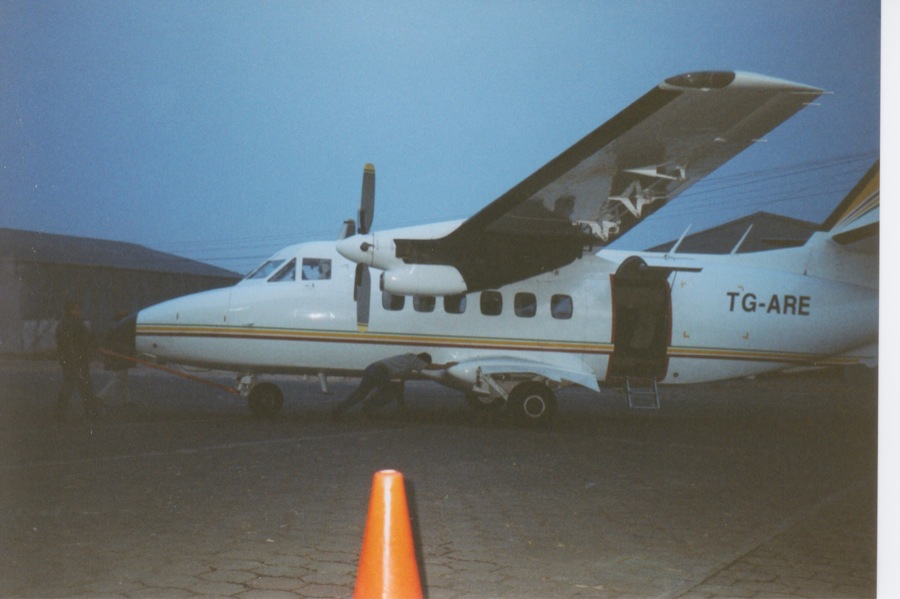 “I’ve flown all over the world and I’ve never seen anything like that,” the woman said.

I scratched my chin. “You know, I’m surprised those guys weren’t instructed to hum like an electric car as they pushed. So that we could all pretend to see one.”

We boarded the plane and it trundled down the road in a roar of propeller wash. Thankfully it was too early to encounter other traffic. I thought that we might take off from the street, but we drove to the international airport and borrowed a runway.

We climbed to cruising altitude and leveled off. Far below, rugged mountains gradually gave way to jungle flatlands. The Petén stretched as flat as a dinner plate all the way to the bejeweled Caribbean — a tangled wilderness threaded by nothing but a couple lonely dirt roads. From so far up, the trees looked remarkably like broccoli.

The American lady was seated across the aisle. She reached over and nudged me. “I think this plane’s Russian,” she said.

The plane looked new but she was uneasy, as though “Russian” were synonymous with the safety record of Aeroflot.

I pointed at a button beside the overhead reading light. “Did you see that?”

“It’d be easier to just reach up and tap them on the shoulder.”

We were interrupted by the pilot as he turned around to pass out drinks. He was sitting at the stick preparing coffee.