Vagabond Dreams Outtakes are “deleted scenes” from my book. Think of them as a “Special Features” disc of outtakes and curios. This incident took place in the Peten region of Guatemala… 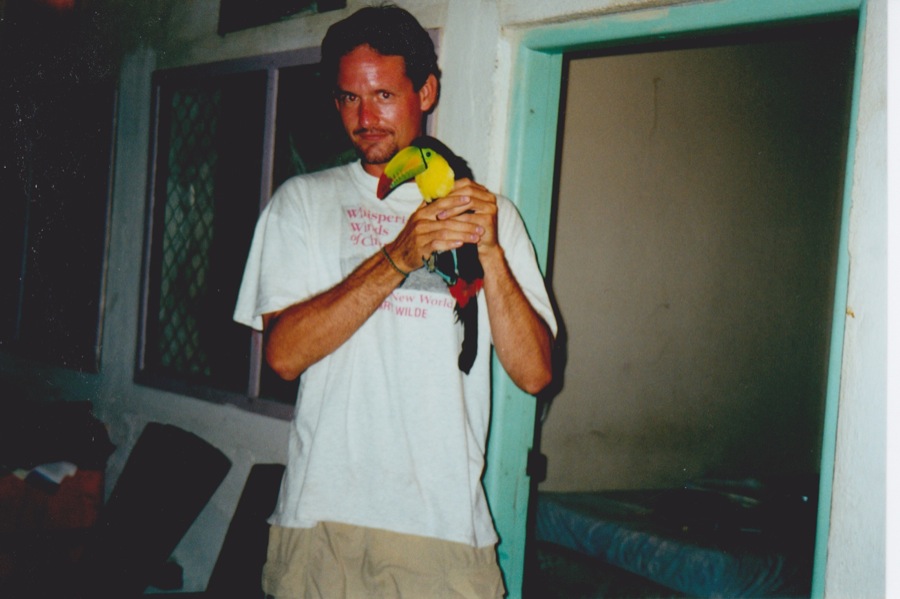 The light through the window lay across my chest in a square pattern, broken by the lazy sweep of a ceiling fan. It was a picture straight out of Joseph Conrad; a movie version of a malarial sickroom. I appreciated the exotic image and knew it would make a great story, but it wasn’t so cool with no one there to see it.

I was hundreds of miles from home, in a backwater jungle town. No one knew where I was. There was no one to help me if I got worse, but I was too sick to care.

My room had been built inside a restaurant, facing directly onto the tables. It was as though they couldn’t decide which to build — a guesthouse or a restaurant — and somehow ended up with both. There was no window to close, and music came in through the screen at full volume, torturing me with its relentless, insistent, empty-headed beat. I cursed the staff, damning them to a hell of foul hangovers, an eternity in a machine shop, or perhaps the ravages of tinnitus. But I was too weak to complain.

My illness intensified during the interminable rolling night. The fever’s auguries brought on lifelike hallucinations that flickered across the overheated theatre of my mind. I saw the faces of people I hadn’t thought about for a decade: people I’d gone to high school with, people I’d known as a child. I walked through old neighbourhoods and incidents, through expired hopes and dreams, seeing it all at one remove. Fitful dreams blended with disconnected reality, and I completely lost track of which was which.

Two days later, I emerged squinting into the copper twilight of Flores. After a bland meal of rice, vegetables, and water, I sat in the wooden chair in front of my room to write.

I put on my walkman to blot out the restaurant’s background noise. I was still pissed off at the staff, still offended by their constant clamor that intruded upon the silence of my inner world. The memory of their shouting voices and my aching head was still a fresh offence.

A worker passed by my chair and noticed the empty tape case.

I nodded. He launched into a heartfelt rendition of Rayando el Sol, looking me straight in the eye the entire time, obviously pleased with the clarity of his own voice. His directness made me uncomfortable, and it took all my effort not to blink and look away.

“Want to put it on the stereo?” he asked.

Soon all the workers were walking around singing the songs I’d been listening to since Nicaragua. It was like inhabiting the edge of a musical. The dam of reticence had finally burst — mine and theirs — and their curiosity spilled over. One by one they came over to talk to me, completely abandoning the customers on whose tables they were supposed to be waiting. They only went back with reluctance when the bartender hissed and jerked his head towards the patio, to be replaced soon after by another eager conversationalist.

The waiter who put on the music came back later to return my tape, and we talked until closing time. At one point I pulled out my wallet to buy a drink. It was a brown leather billfold, badly scuffed, the stitching held together with filthy surgical tape. I carried it on purpose, as a lucky talisman and as a bit of a ruse. It looked so bad it was beyond theft. That was my theory, at least.

“That wallet is very old,” he said, frowning and shaking his head.

He pulled out his own wallet, emptied it carefully, and handed it to me.

“I can’t take that,” I said politely.

“Please…” He pushed it into my hands with finality. I didn’t know what to say. How could I explain that I had two brand new leather wallets at home, pushed to the back of a drawer, still fresh in their boxes? And how could I tell him I carried this beat up ruin because none of his countrymen would want to steal it?

I finally accepted it, with reluctance. I couldn’t cause insult by refusing a gift that had been offered honestly, in comradeship. I was deeply touched by his generosity. In a country like that, in a poverty stricken jungle backwater town, a poor Salvadoran immigrant waiter pitied me and gave me the wallet from his pocket. It was the non-clichéd equivalent of offering someone the shirt off one’s back.

I encountered such generosity everywhere I went in Central America. If people thought I was a rich tourist they sometimes tried to fleece me, but if they thought I was poor like them, or if they had established the slightest personal connection, they shared of what they had, freely and with no thought of reward or gain.

It was so far from the image of that place that existed in North America. Those who sat at home in their comfortable air-conditioned houses, filtering the world through the TV news, expected robbery, conniving dark-skinned locals, sneak thieves and revolutionaries. They couldn’t imagine that these were people just like us. People with their own hopes and dreams. Kind, warm people who were always ready to extend the hand of friendship, if only you could summon up a smile. I’ve rarely encountered that sort of openness in the so-called First World.