This is the third in a multi-part blog on North Korea.

I’ll begin by telling you a little about our hotel: our posh 5-star jail-away-from-home, the site of our evening house arrest, an excursion into the surreal side of tourism at the edge of the map.

First, the food. Despite the high price we paid to get into the country and the constant reminders that we were getting luxury class treatment, the food at the hotel was consistently bad all week: coarse rice, watery soup, a spicy vegetable dish, and spicy beef or bony fish or an awful squid in red sauce. I also heard from reliable sources that North Korea bought their beef from Germany, and that the regime got a very cheap price for meat slaughtered due to fears of mad cow contamination (this was 2001, the height of the Mad Cow scare). We probably ate it every day. Ask me about it in two years, that’s the incubation period for the disease. 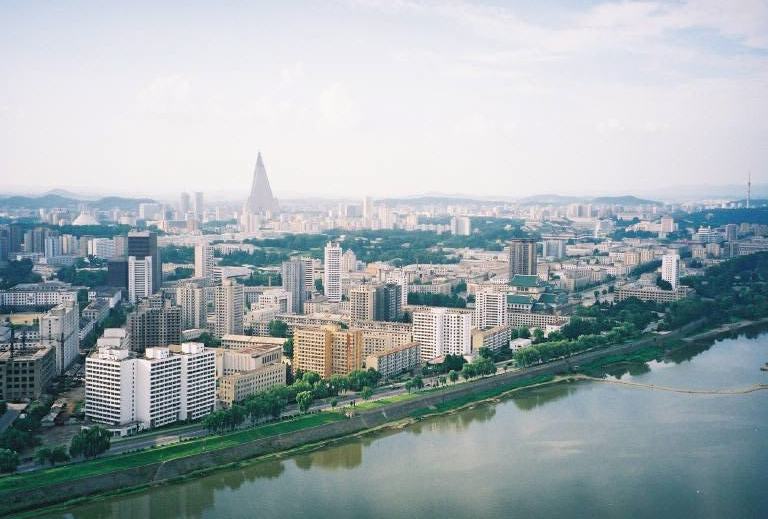 We ate breakfast each morning in the revolving restaurant on the roof. If dinner was consistently bad, breakfast was consistently worse. We were fed cucumber and onion salad every day (oh how I dreaded seeing that pale green plate!), usually scrambled eggs mixed with ham or something meat-like, two pieces of toast, a canned fruit drink from China with the expiry date scratched off, and a very small cup of coffee. The Europeans always wanted more bread; this was a daily struggle. That and coffee. “Coffee! Can we have coffee!” or “Bread! More bread!” It became a running battle. The waitress usually shook her head no. Sometimes she said yes, then went back to the kitchen where the manager no doubt denied her request, whereupon she came back to the table and barked “No coffee!”

We were suspicious of this. The food was there, but for some reason they didn’t want to give it to us. We fought a determined campaign, and by the third day we succeeded in getting a second cup of coffee. 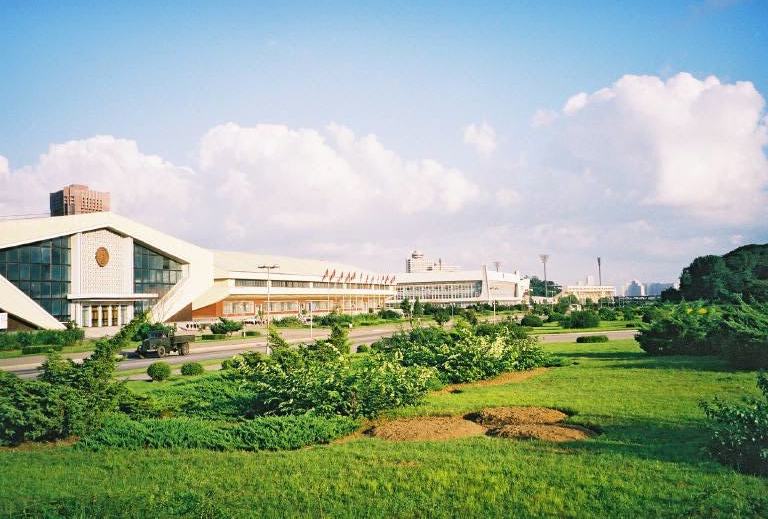 Another commodity in short supply was butter. Each person got one tiny packet of New Zealand butter and a tiny packet of European jam. Anyone fortunate enough to get extra toast didn’t get extra spreads. We were always scrounging the last scrapings of butter from everyone’s leftover packets. Same thing if someone wasn’t feeling well or wasn’t hungry—their dishes were up for grabs. A free market soon broke out at the breakfast table. Halfway through the week, we began trading on futures: “I’ll give you my eggs today, but I want your toast tomorrow.”

In the evenings our watchers left us alone, and we had the run of the hotel. It was on an island in the middle of the river, so we couldn’t go anywhere even if we did manage to sneak out. 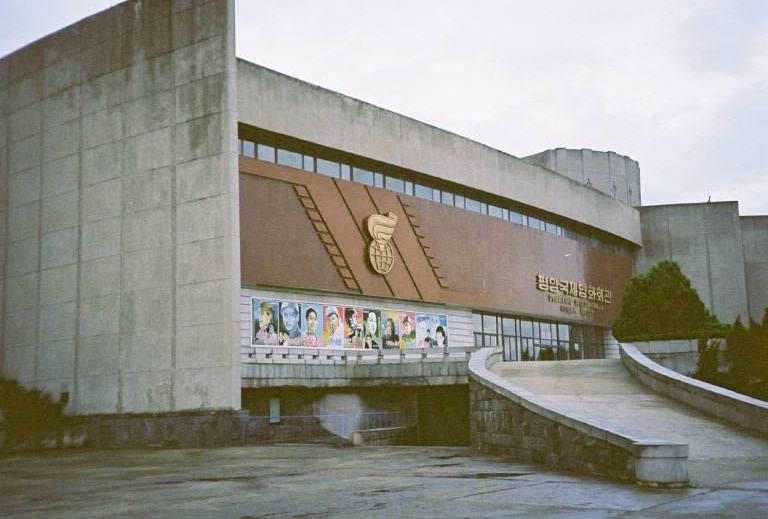 On the main floor I found a bookshop with stamps, maps, postcards, and English books. It was there I learned that every book in North Korea is, incredibly enough, written by Kim Il-Sung and Kim Jong-Il. I don’t know how they find the time. Typical subjects were communist philosophy/Juche, stuff related to the Korean War and reunification, and even a book on filmmaking. If you want to read anything else, forget it. But hey, what else is there?

The hotel also had the usual gift shop on the main floor. They offered standard items like cartons of cigarettes and bottled water, as well as enormous pointy communist bras and expired Russian medicine that included antibiotics and syringes.

Those things were mildly strange, but it was in the basement that things got really interesting. The hotel had two totally separate basements (not counting the possible third hidden basement we speculated about—the one with the gulag and torture chamber). The first basement was Chinese run and owned. It contained a massage parlor, casino and a Chinese brothel. This was strictly for foreigners.

The hotel also ran the second basement, which seemed to be open to some of the higher ranking party members from the city. In this strange, low-ceilinged, sterile white domain of endless winding corridors, we found two empty restaurants and a dusty gift shop, a swimming pool with no water, an empty karaoke room, a billiard hall, and an abandoned three-lane bowling alley. 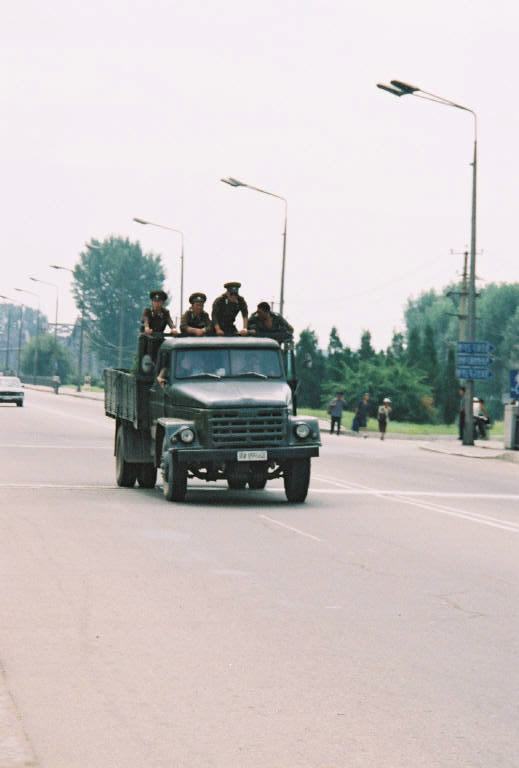 It’s kinda cool to say that I learned to bowl in North Korea. We spent every night down there. By applying taijutsu and throwing the ball like a punch (my martial art of bowling method), I always managed to improve on my score from the previous evening, and on the last night I finished first.

The old Korean ladies who ran the bowling alley were very happy to see us. I imagined them sitting down there night after night, collecting dust, waiting for a tourist flood that never came. Totally forgotten by the hotel administration, they scrounged food and dreamt about sunlight and birds and wide open skies. It had probably been months since they had any customers, and maybe that long since they’d seen another person. Shit, they may have been locked down there for years. 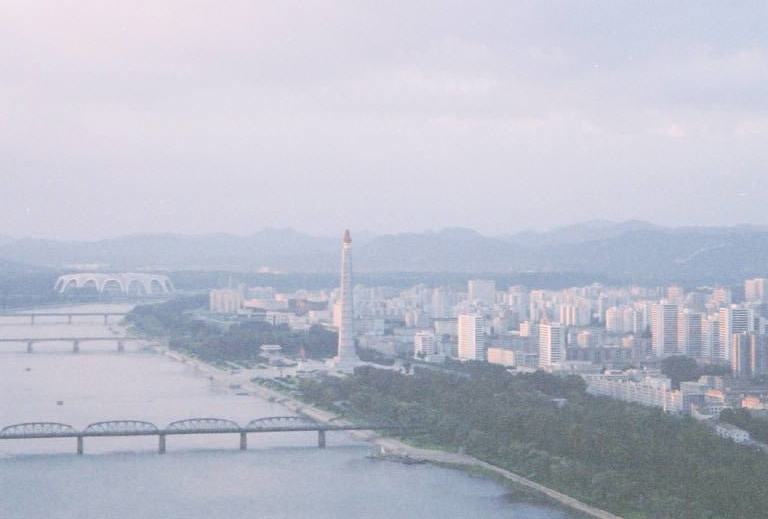 The Tower of the Juche Idea in Central Pyongyang, built to symbolize the illuminating light of the Juche philosophy, or Kim Il-Sungism. This socialist philosophy, invented by the elder Kim to guide the Korean people to prosperity, is central to all aspects of life in North Korea. It’s also bankrupt and unworkable, and has totally ruined the country. Next to the Juche Tower I saw a large group of people in uniform practicing marching. A loudspeaker rigged up on the step blared military music as they clomped past in unison, over and over, while two critics yelled encouragement in the form of abuse and hit them with sticks. Our minders said they weren’t soldiers but civilian “volunteers” practicing for the big national holiday in September. We thought they were mistaken and asked if they meant the Liberation Day holiday later that week, but they said abruptly there were no celebrations that week. We’d heard otherwise, and been told that if we got permission it would be on our agenda. It seemed they didn’t want us to go. Courtesy of our minder: “In North Korea scientific socialism is alive and prospering. The Great Leader said that the communist regimes in Eastern Europe and the former USSR failed because of ideology. They forgot to factor into their ideology the crucial ingredient of love.” Uh-huh. The Monument to the Foundation of the Party. There’s only one political party in North Korea, the Korean Workers’ Party. It meets very rarely. The monument features three symbols—the hammer, sickle, and ink brush—thrust into the air in huge fists. The inside is decorated with bas-relief designs on three sides. They depict: the Great Leader liberating the country from Japanese occupation, the Great Leader leading the fight against America in the Korean War, and the Great Leader rebuilding the country. Does anyone detect a theme here?