This is the fourth in a multi-part blog on North Korea. You can find the others here

One day I took an overnight trip from the capital of Pyongyang. A field trip of sorts. It was the only time we were permitted to sleep someplace other than our hotel, locked down on an island in the city.

We drove on a smooth, wide multilane “tourist highway” that begins in Pyongyang and ends at Mt. Myohyang, a couple hours to the north. The countryside was lush with rice paddies and potato fields, peppered with the bent backs of workers. Though the land remains pristine and unpolluted largely due to a lack of industrial development throughout most of the country, this abundant greenery was somewhat misleading. It was the tail end of the harvest, and the countryside is normally lush and green at that time. The northern mountains, which make up most of the country’s landmass, are much drier and totally lacking in agriculture. 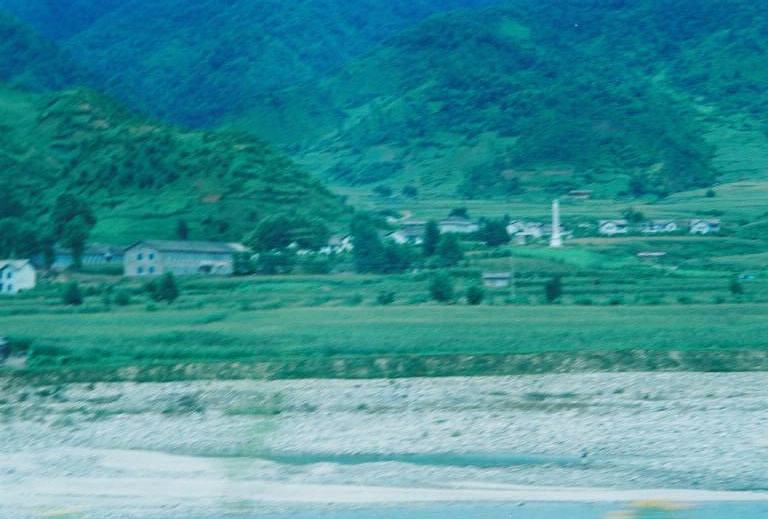 After just two days on the inside, we were already suspicious that the land bordering the highway had been carefully tailored for us to see. Most visitors and officials who come to North Korea take this route at some point during their stay. The government is very careful about what they see, and as we learned a few days later, they spare no expense in creating the most elaborate illusions.

Throughout the countryside, in the middle of rice paddies and on the sides of hills, I saw billboards etched with Korean characters. These were political propaganda slogans or words from the Great Leader. Even there, in the middle of a field, the average North Korean can’t escape thoughts of the Leader. Messages are deliberately placed to remind them of the regime and to draw their minds back to their oppressive day to day reality. In every small village and at every crossroad there’s guaranteed to be a giant painting showing the Leader doing something. He truly is omnipresent.

The trip was supposed to be a routine drive down a manicured tourist highway, but luck was with us, and I was able to catch an unexpected glimpse behind the curtain of lies the North Koreans had so carefully woven for our benefit—one of only a few instances during the entire trip that the truth showed through. 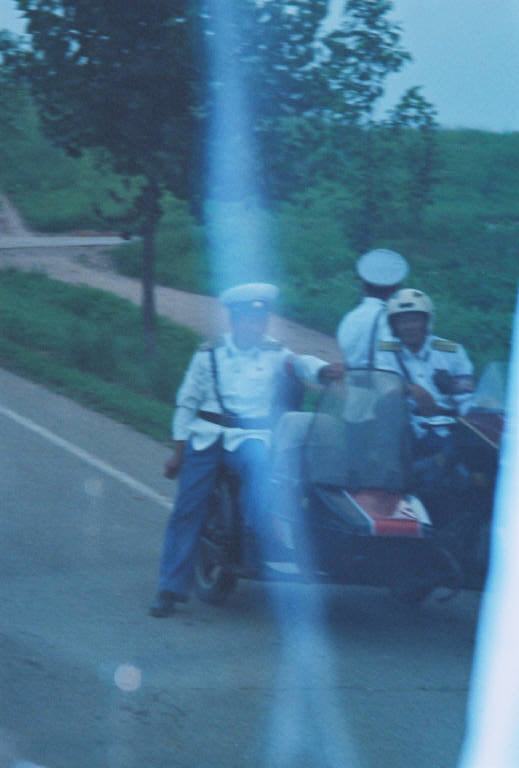 It happened when we were forced to turn off the main road due to unexpected maintenance work. Our watchers were as surprised as we were by the detour—it was clear from their reactions that they hadn’t been briefed to expect it.

Unlike the “tourist highway,” the local roads were barely passable. It was obvious from the way people sat on the road or walked down the center without looking back that they were unused to traffic. The only vehicles I saw were wooden carts pulled by oxen. A steam train sat on a siding, the people working on it indicating that it was still in use. Even some of the military vehicles had hand cranks on the front. They must have been from the First World War. I wonder if the Americans know that, to totally cripple the North Korean land forces, they just have to send in a small team of saboteurs to steal the cranks? 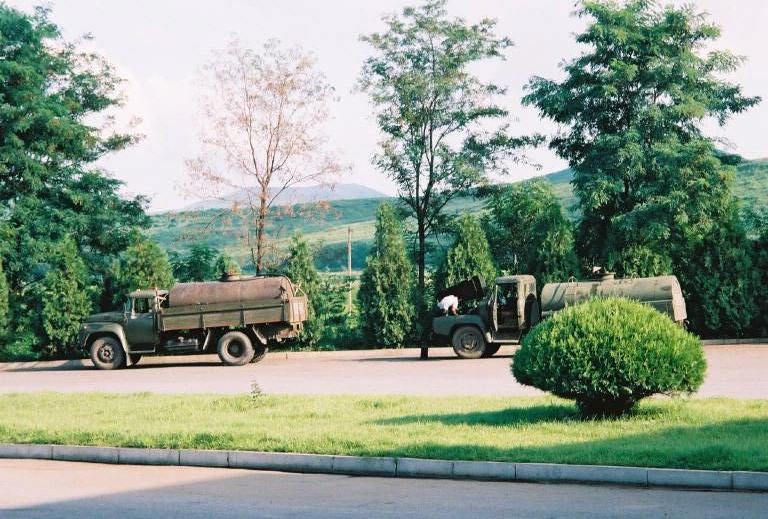 By then we’d developed a method of taking photos of things we weren’t supposed to record. During the first two days, we asked our watchers for permission every time we wanted to snap an image of a monument. Over time they began to trust us, and we were obliged to ask less and less. They assumed we knew the rules and were cooperating. And so, each time we wanted to document something forbidden, I stood in front of a monument or other acceptable subject while my accomplice focused over my shoulder. Many of the photos you see here were obtained using that simple method. 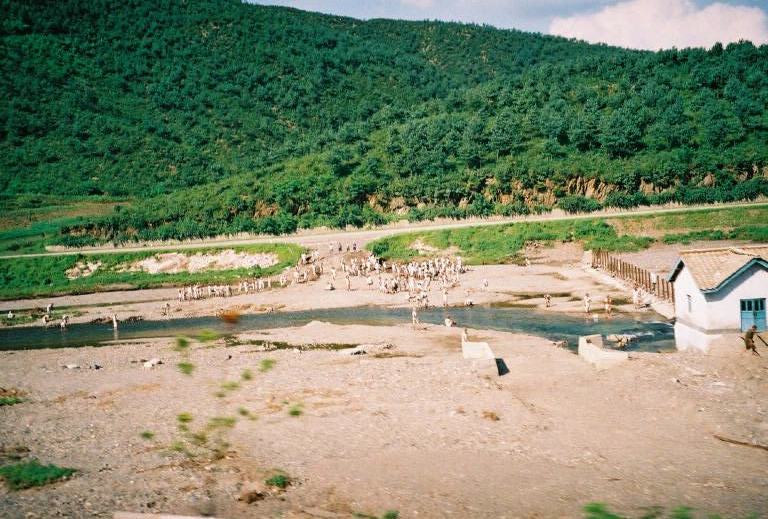 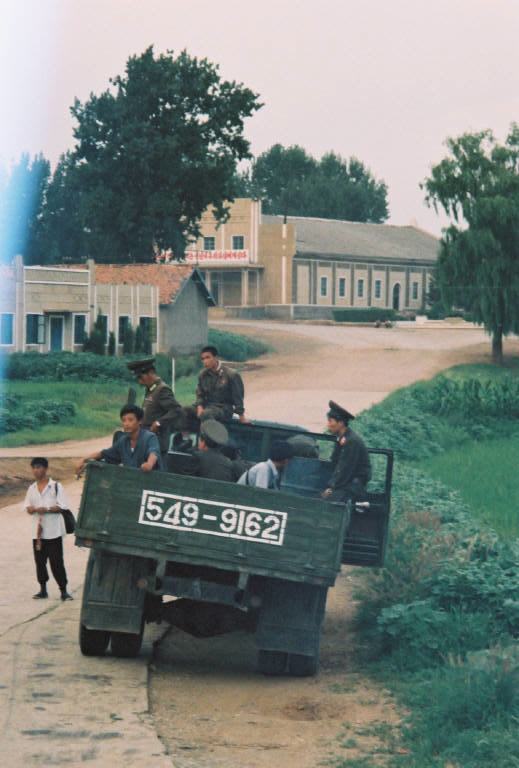 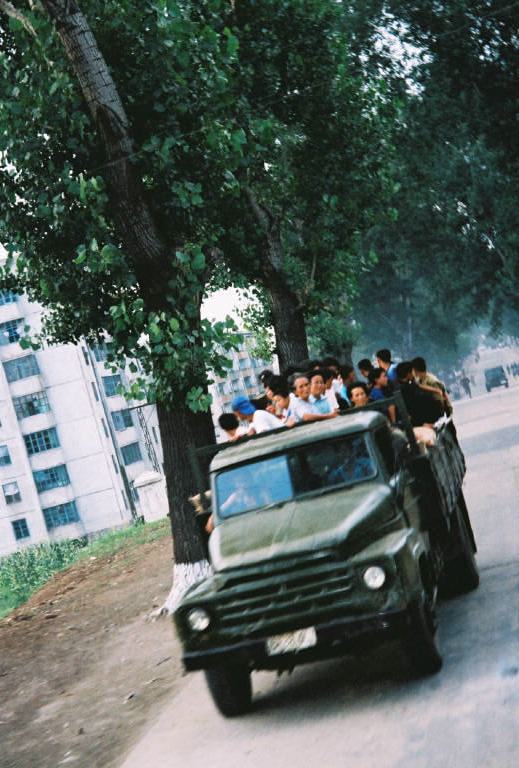 The other highlight of the drive was a stop to tour a large cave system. Several North Korean tour groups were passing through at the same time. They were visibly startled to see us, and they turned away quickly. Unlike the Chinese they didn’t stare.

Our cave guide’s comments throughout the tour were typical of the sort of propaganda we were bombarded with during every waking moment of our stay. At least twice she paused to say, “On this spot the Leader stopped to pose for a picture, so if you’d like to take a picture here please go ahead.” And near the end, “On this spot the Leader offered on the spot guidance. He said, ‘We don’t want our guests to get tired, so we should put some benches here so they can rest.’ And so we built these benches.” She stopped and turned to us, clearly expecting applause, as though the Leader had just invented time travel or cold fusion.

Despite the distracting flow of propaganda, I couldn’t help speculating that perhaps the cave also housed an underground bunker. There are said to be many all over North Korea—they’re master tunnellers, and have reportedly concealed entire nuclear enrichment facilities and military bases inside a vast network of subterranean caverns all over the country.

The cave was deep, the highway to the capital was a good, smooth road, and a suspicious helipad was located right outside. The entry was also covered by a two-storey cement building. There were certainly many unlit side passages which could have concealed a steel door. The entire time we were underground I poked around at the back of the group, looking for the entrance to a world of James Bond villains that I knew must have been there.

After touring the caves, we got back on the road and finished the drive to Mt. Myohyang. Our hotel looked like a base from a science fiction film, with two angled wings and a revolving restaurant on top. That bit about the restaurant was extremely odd, because the hotel had been built in a vee of the mountains. At dinnertime it was pitch black and there was absolutely nothing to see.