This is the sixth in a multi-part blog on North Korea. You can find the others here

The International Friendship Hall is one of the most bizarre things I’ve ever seen.

It’s an enormous marble Korean-style building constructed to house all of the gifts given to Kim Il-Sung, from almost every country in the world. Many of these gifts were from heads of state (the most elaborate being from fellow dictators), but the majority were from Communist parties and Juche philosophy study groups in different countries. At the entrance we were instructed to hand in our cameras and pull large cloth covers on over our shoes. The temperature was maintained at an artificially controlled chill, somewhat like a morgue (I imagined it held the rotting remains of the North Korean people’s hopes and dreams).

Inside, gilded ceilings soared above us as our feet whispered across polished marble, shattering the glittering reflection of cut-glass chandeliers. A large part of the building seemed to extend into the mountain behind it. Like Dr. Who’s tardis, its inside was much larger than the exterior would lead one to believe. There were straight hallways so long I could barely see the end of them, with doorways on each side opening into gift rooms organized by country and region of the world.

We were told we didn’t have nearly enough time to see it all, which according to the official guide would take about a week. We decided to view the gifts from Western countries, curious to see what might have been sent from our homelands. (For the record, Canada’s section was quite small, four or five modest gifts including a small soapstone carving and a Group of Seven art book—it felt diplomatic, an extension of the barest courtesy.) The most extravagant gifts were of course from fellow dictators: a bullet proof limo from Stalin, luxury railroad cars from Stalin and Mao Tse-Tung, a stuffed alligator waiter holding a drink tray from the Sandinistas in Nicaragua, an enormous sailboat intricately carved from a single massive block of jade from China… It went on and on. There was even something from North Korea’s great enemy, the United States–a basketball brought by Madeline Albright on her visit during the final months of the Clinton administration.

As we made our way through this vast treasure house, the contents of which must surely have been enough to feed the starving country for years, we met up with a group of touring schoolchildren. The regime extracts full propaganda value from the place, telling its people that North Korea is looked up to by the rest of the world, and that the Great Leader was loved and respected so deeply that other nations showered him with presents. 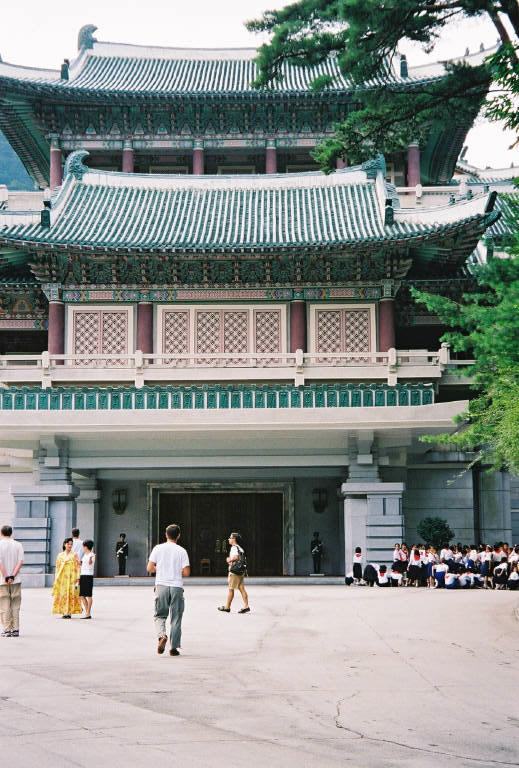 The tour finally culminated in the epitome of ghastly hagiography. We were ushered into a dimly lit room with bird calls emanating softly from the shadows. I glanced around walls lined with a few important gifts, until my gaze reached the far end and I gave an involuntary shudder. Tastefully lit from below by spotlights was a very life-like wax figure of Kim Il-Sung standing in a forest setting. It was apparently sculpted soon after his death, and I have to admit he looked rather fresh.

We were told that in this room the Great Leader lives on for the Korean people. We were then “encouraged” to line up in front of it and give a “one-time bow” to show our respect. The bowing was just a motion, it meant nothing to me, though some of my colleagues were visibly uncomfortable at being made to perform this gesture. In my opinion, by far the worst part of it was that Ol’ Wax Kim looked like he might break into a smile and start giving “on the spot guidance” at any second.

After touring the Hall of Gifts we were led to an outdoor terrace on an upper floor for a rest. The view over the valley and surrounding mountains was indeed quite beautiful. So beautiful, in fact, that our guide told us “when the Great Leader was here he was so inspired by this view that he composed an on-the-spot poem.” She then passed us a copy in English, and one of the guys was obliged to read it aloud. We all expressed polite appreciation over the Great Leader’s way with words, but jeez, it didn’t even rhyme.

To me the most appalling thing about the Hall of Gifts is that it had been built during Kim Il-Sung’s lifetime. He willfully participated in the elevation of himself as a living god. And of course the official myth has been extended to the next generation.

There was another hall of gifts across the parking lot from the main one, this one housing presents received by the (current) Dear Leader Kim Jong-Il. It was much smaller than the father’s repository, with many empty, sealed rooms. Our guide explained this away as foresight: enough rooms had been built to anticipate all the gifts the Dear Leader would receive in his lifetime. No one pointed out the fact that, well, Young Kim’s getting up there in years, and that place is an awfully long way from being full. 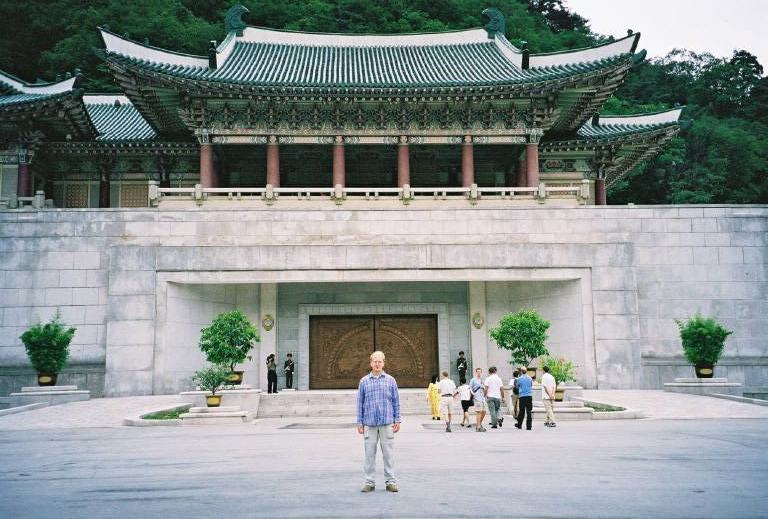 The entrance to this treasury was guarded by soldiers cradling silver-plated, engraved Kalashnikovs. As we walked towards it, the heavy stone doors slid apart automatically in true James Bond fashion. I expected to see Blofeld roll up in his chair, petting a white cat and leering through a monocle.

The guide insisted we didn’t have much time—there was clearly a tourist backlog waiting behind us—and that we could only see a few of the rooms. She took us through the section containing gifts received by Kim Jong-Il over the previous two years (you’ll recall that the gifts in the other hall were organized by country). Two of the rooms were mostly filled with modern crap sent from South Korea—furniture, big screen televisions, VCR’s, and computers. For all I know, these may have been leftovers from one of his houses.

I’m pretty sure that what we saw in the second building must in truth have been all the official gifts Kim Jong-Il has ever been given. He’s reclusive, he seldom receives visitors, and he’s only ventured abroad a couple of times.

It must be lonely being a dictator, spending all your time running the country (into the ground), writing books, and warding off enemies.

Come on. What are you waiting for? Send the guy a birthday present.