This is the ninth in a multi-part blog on North Korea. You can find the others here

One of my creepiest experiences in North Korea was a tour of a primary school.

Our bus pulled into an empty, cheerless concrete schoolyard, and we were marched up to the principal’s office. I had immediate flashbacks of all the times I’d spent in the office as a kid, and the string of suspensions I earned. I wonder how I would have fared in Pyongyang? 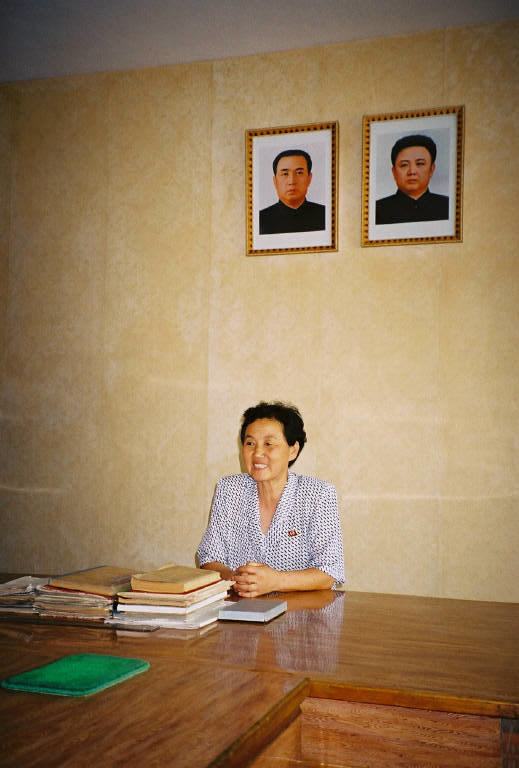 We sat around a large conference table, where the principal told us about the North Korean school system and how her school is run. In primary schools, morning classes are devoted to Communist morality, revolutionary history, Korean language and arts (with revolutionary themes), and the study of the lives of the Great Leader and the Dear Leader. I suppose leftover time must be allotted to math and science. Afternoons are apparently free leisure time. Students can go home and do their own thing, or they can voluntarily study such things as traditional music or dance. We would learn more about what “voluntary” meant that afternoon.

While we were talking one of the guys asked if he could take her picture. She nodded yes, but as he began snapping photos she stopped in mid-sentence and pointed to the wall above her head, at the ever-present framed pictures of Kim Il-Sung and Kim Jong-Il. “Please be careful not to cut the Leader’s photo in half,” she said.

I later discovered that it’s a crime to do so. It’s also a crime to tear a picture of the Leader in half, even if it happens accidentally.

(I heard a story about a German who visited North Korea on the same sort of trip as me. He was smoking in his hotel room, and he butted out his cigarette on an old newspaper. He didn’t know there was a photo of the Leader on the other side. The cleaning staff found it and reported him. Armed men burst into his room, threw him on the floor, and shoved guns in his face, screaming in furious Korean. The situation was eventually calmed down, and he was immediately deported to China, his trip at an end. The punishment for locals is time in a concentration camp.)

After our brief talk with the principal, we were given a tour of the school. We were told that unfortunately it was summer vacation and the students were away. We’d seen kids all over the city wearing school uniforms, but apparently they were involved in “voluntary extra curricular activities.” I wonder if the kids are always on vacation when groups of foreigners come to visit?

Despite that warning, when we toured the classrooms we discovered some children had been brought in for our benefit. The girls were dressed in frilly white dresses and traditional Korean gowns—hardly the kind of thing you’d wear to school. 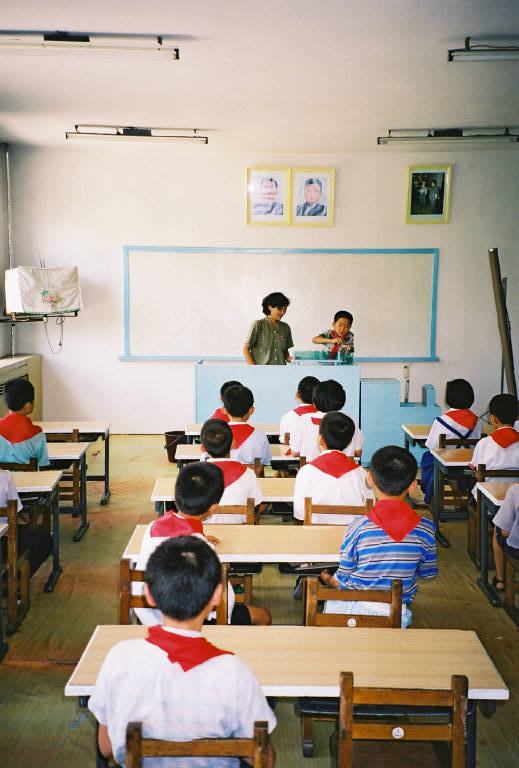 The hallways were silent, but just as we were about to step into the science lab the room broke out into animated voices. We walked in on the teacher in mid-lecture, as one eager boy was offering the perfect answer to her question. The noise died moments after we left the room.

In another classroom I saw a picture of Kim Jong-Il as a child sitting on his father’s knee. I asked our minder how old the Dear Leader would have been in this photo. He said about 10 years old. I then asked him the date. It corresponded exactly to the date when the military museum guide told us the child prodigy General Kim Jong-Il was leading battles and planning military strategy against American and UN forces during the Korean War. The official propaganda is full of such contradictions, but everyone ignores it as though their life depended on it (it does). Those first two classrooms were weird, but they had nothing on the art class. We entered the room to find that the kids had just finished drawing perfect copies of a bird. They were just setting down their pencils as we walked in. Tacked up on a bulletin board were other samples of their work. One showed a ship being torpedoed, with “USA” written clearly on its side. Another showed an American soldier being stabbed in the throat by a schoolgirl with a giant pencil as great gouts of blood spurted from the wound. This isn’t something they dreamed up on their own. Everything about their upbringing in North Korea has been carefully calculated to indoctrinate such hate. Our last stop was the music classroom. The students struck up a well-rehearsed concert just as we walked through the door, but the effect was calculated to seem like they’d been “practicing” all along. They played for 20 minutes, accordion, guitar, traditional songs and dances. They were really quite good, but I didn’t get the impression that they were enjoying it. Their faces were frozen in fake smiles, and they all swayed back and forth in the same zombie-like fashion. When anyone made a small mistake, they snuck fearful glances at the stern-faced teacher like a pet cowering in anticipation of a kick.

When the concert ended the children set down their instruments and rushed towards us in a group. They simply wanted to grab and shake our hands, but all I could think about was that drawing of the American soldier being stabbed in the throat–I covered my neck and almost recoiled in horror.

Here are a few more photos from the school visit, because you really have to see it to believe it… 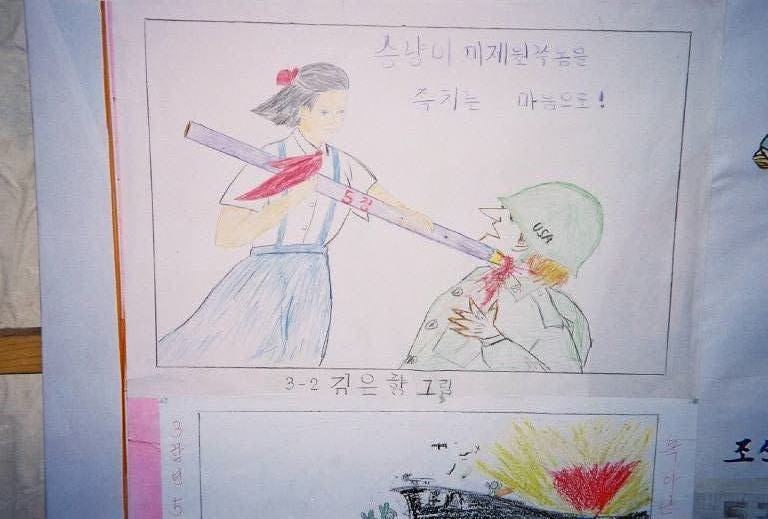 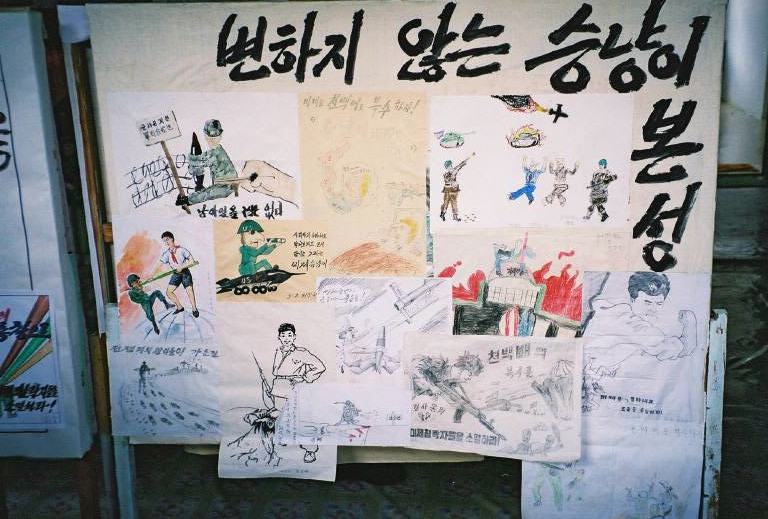 Studies in the lives of the Great Leader and the Dear Leader, one of their core subjects: 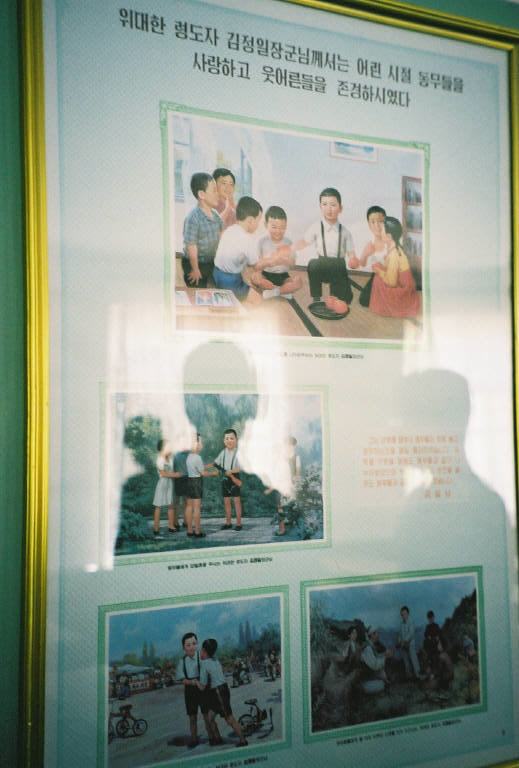 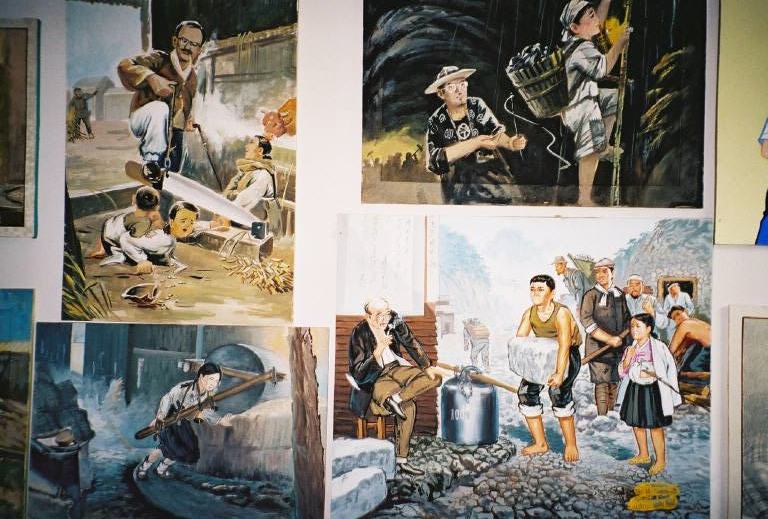