This is the fifteenth in a multi-part blog on North Korea. You can find the others here

The highlight of my time in North Korea—the moment that made all the badgering and propaganda worthwhile—was our visit to the Demilitarized Zone and the truce village of Panmunjom. This thin line bisecting two worldviews is the last Cold War frontier, and the world’s most heavily defended border.

The uneventful drive from Pyongyang featured the same broad tourist highway we’d seen on the drive north to Mt Myohyang, with the same manufactured greenery on both sides. There were more roadblocks and checkpoints as we neared the border, but this was the only indication of the massive concentration of conventional, chemical and biological weapons stockpiled in the surrounding hills.

One of the guys in my group was carrying a Beatles tape he’d picked up in Beijing, and much to our surprise our minders let him put it on. At times like that the world seems to waver and reality looses its grip. We were rolling down a highway in the most oppressive totalitarian country in the world, listening to songs of love and freedom. It felt like that music insulated us and protected us from the horrors outside.

Between songs, our minder explained Kim Il-Sung’s brilliant idea for reunification of the two Koreas.

“The Great Leader saw one country, two systems, and two governments. In this way the Fatherland can be reunited.”

“But isn’t that two countries?” I asked.

He just repeated the formula. At the end of the road we pulled up in front of a small building. We were told to wait there, and that several soldiers would accompany us around the Zone “for our protection.”

We met a strange Australian ‘tourist’ inside. He was sitting in the corner with his two minders, dressed entirely in military fatigues, right down to the polished black boots. When we questioned him he insisted he was just a civilian on vacation, and that he dressed this way because it was “more comfortable.” He became another subject for our daily speculations. You don’t come to the world’s most heavily defended border dressed like a combatant if you’re a tourist.

The military guide arrived and took us to another room, where he explained the features of the DMZ using a large scale model and wall map. “Here we can see firsthand the suffering and anguish of the Korean people over their divided Fatherland,” he said, peering at us with beady eyes, as though we were personally responsible.

One of our guys pointed to the map, at some islands which appeared to be very close to the border. One was clearly to the north of 38 degrees. But the red line didn’t extend that far.

“Which country do those islands belong to?” he asked.

The soldier answered a totally different question three times in a row, repeating by rote the same general information from his speech about where the border runs.

Peter finally gave up and let it pass. Even the Lonely Planet guidebook is clear that the islands belong to the South. The North Koreans didn’t want to admit this, for some reason unknown to us.

We reboarded the bus accompanied by our military escort, and passed through triple rows of electric fence.

“You are now inside the truce village of Panmunjom,” our minder said. “It is called the “peace village” because no weapons are permitted here.”

I pointed out the window at a soldier walking past.

Our minder glanced quickly at the AK-47 slung over his shoulder. “It’s not loaded.”

Clearly the subject was closed.

We were taken to the building where the Korean War armistice was signed. I could sense the North Koreans rolling up their metaphorical sleeves for a serious bludgeoning of propaganda.

“The US came here hiding behind the flag of the United Nations, with their South Korean puppet stooges and their 15 satellite countries,” they said.

“Notice that the UN flag is all faded and yellow, but the DPRK flag is still as bright and fresh as the day the truce was signed. It points to the fact that the intentions of the United States and the United Nations were rotten to the core, while those of the DPRK were pure.”

That was a bit of a cheap shot. No doubt they’ve replaced their own flag several times since 1953. Few people realize that a full peace treaty was never signed—only a cease fire—and so a state of war still exists between North and South Korea, and by extension the 15 countries of the UN mandate. The North Korean opinion of that cease far was made very clear to us.

“Here you see a copy of the armistice agreement. We regard it as nothing more than a worthless piece of paper.”

Suitably chastised, we were loaded into the bus once more and driven a short distance to a small parking area. I happened to look to the left as we pulled in, and saw a group of soldiers hiding in the bushes. As our bus rolled to a halt the officer nudged the lead man. They marched out of the shrubbery and passed the bus in a crisp column, hurrying along as if on some important business. No one else in the group had seen them waiting there; they were all looking to the right where the border would be.

When we were finally permitted to disembark our military escort ordered us to pair up and form two columns. We were expected to march in an organized fashion to reflect dignity and respect of this important place.

After the barrage of propaganda we’d just put up with, not to mention the insults to our countries and our countrymen, this was too much. As we marched across the parking lot in the hot sun, one of the Brits began whistling the song from Bridge on the River Kwai. It immediately spread through our ranks until we were all whistling loudly in protest.

The Korean soldiers just looked at us with puzzled expressions. They either didn’t get it, or they thought it was a traditional marching song. Lucky for us they hadn’t seen the movie.

I thought the tortures of Tantalus were finally over and that they’d let us see the line, but I was wrong. They halted our column beside a large marble monument which depicted a replica of the final scrawled signature of the Great Leader. According to the official story, Kim Il-Sung died of a heart attack at his desk, where they found his still fresh signature on a document urging the reunification of the two Koreas. That’s how deeply he cared about reuniting his heartbroken Korean people. How poignant. How moving. The soldier blathered on and on about the signature as we stood there sweating in the blazing sun, and it was all I could do not to shout “Shut up! No one gives a shit! Just show us the goddamned border!”

He finally ran out of patriotic things to say, and we were allowed to march over the hill two-by-two. Two large three-storey buildings faced off across the no man’s land of the border, covered in tinted glass and bristling with an array of video cameras and microphones. The line itself—over which so much blood has been shed—was nothing more than a strip of concrete about a foot wide and two inches high.

Five rectangular blue buildings, divided precisely in half by the 38th parallel, straddled the line. The center building was the famous ‘truce building’, where meetings are occasionally held between the two Koreas and through which all messages pass between North and South. 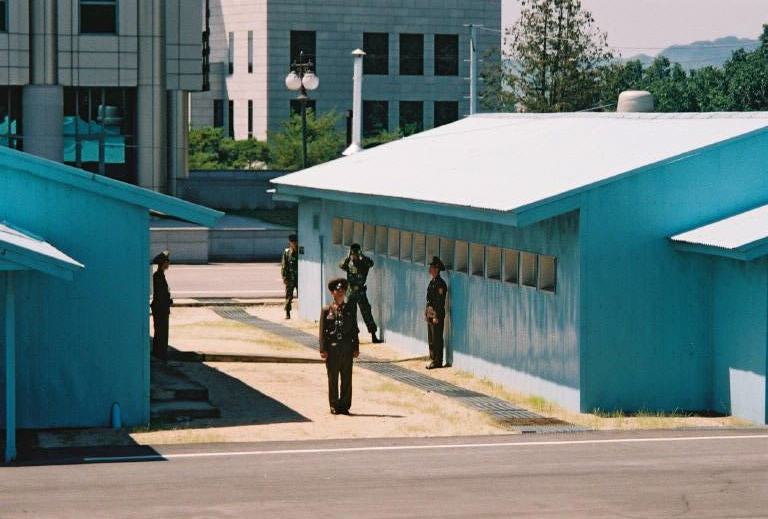 North Korean soldiers had been deployed around the truce building, standing almost nose to nose with an equal deployment of South Korean troops on the other side of that one foot line.

The soldiers on the south side didn’t look very happy to see us. In fact, the first glimpse of white faces on the wrong side of the line prompted a small scramble of troops. US military advisers came running from the three-storey building to peek around corners with binoculars and cameras as we were marched over to the truce building’s blue door. 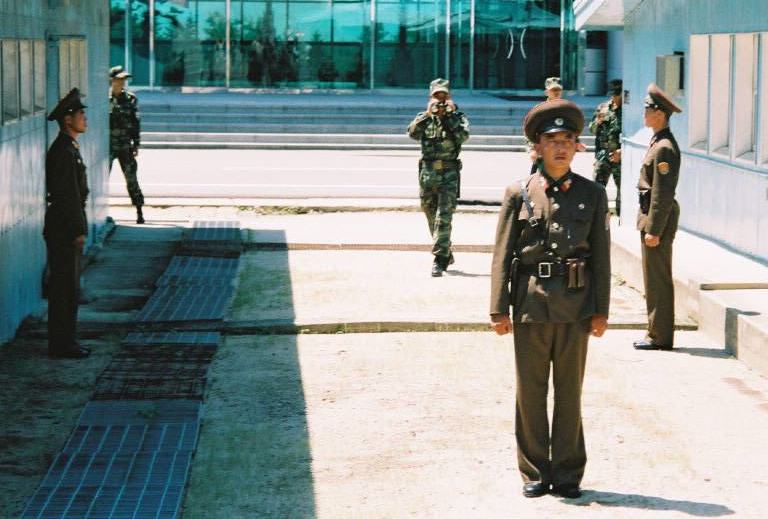