This is the fourteenth in a multi-part blog on North Korea. You can find the others here

The Arch of Triumph commemorates North Korea’s liberation from the Japanese occupation at the end of World War Two. It looks an awful lot like the Arch in Paris, but of course Pyongyang’s Arch was deliberately built to be 3 meters taller… North Korea doesn’t acknowledge the Pacific War (WWII) and the role it played in the liberation of the country, which made this a natural topic to bring up with our minders. It’s good to test the waters every now and then, to remind each other we both know where the line’s been drawn in the bullshit.

“When was Korea liberated from Japan?” I asked, shading my eyes and squinting up at the flat grey stones of this rather uninspiring monument.

“After Japan surrendered to America in the Pacific War?” I asked, in my most conversational tone.

“After the surrender,” he repeated, with a little more emphasis on the neutrality of the last two words.

In the highly creative North Korean version of history, Kim Il-Sung led a vast army of all the united resistance forces, crushing the Japanese occupation single-handedly. Both our minder and I knew this wasn’t true–he had lived abroad while working at an embassy posting, and so he had a little more awareness of the outside world than the average isolated North Korean.

We exchanged a glance, one of those “you know and I know, so don’t push this any farther” sort of looks. I was satisfied and didn’t press the issue. It was exactly the type of answer I’d expected.

After plodding around the hot grey pavement of the Arch of Triumph in the sun, we were taken to a hill on the outskirts of Pyongyang to trudge around the Revolutionary Martyr’s Cemetery. This is the burial place of military heroes from the liberation war against Japan. Each gravestone is crowned by a lifelike bust of the person buried beneath it.

A site guide led us to the graves of important people such as the Great Leader’s brother, and others whose stories of sacrifice and heroism on behalf of the Fatherland were considered particularly moving. At the top of the hill, the focal point of the cemetery, was the grave of Kim Jong-IL’s mother, also a revolutionary hero (at least according to the current version of history), and the occasional third in the North Korean Holy Trinity. The base of her monument was strewn with flowers, evidence of the many North Koreans who came each day to pay their respects. We were once more obliged to line up and perform the “one-time bow” in homage to the founders of this cruel regime. It was just one of the prices we paid for admission. 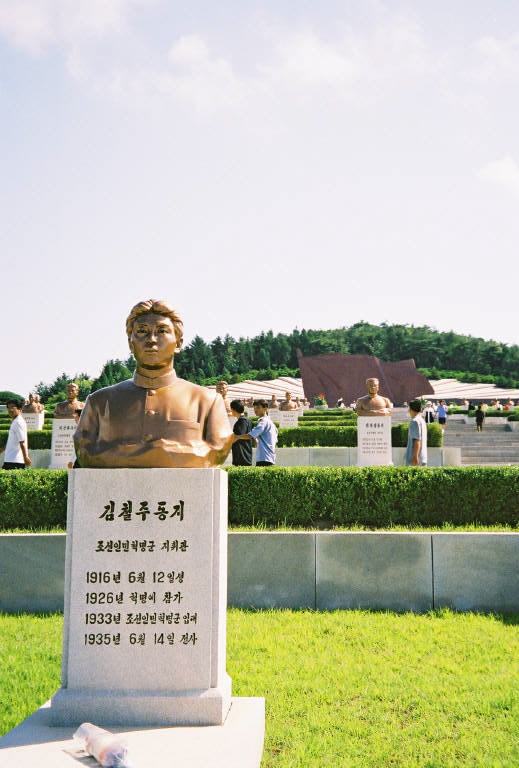 Moping around communist monuments in the sun was finally beginning to wear me down. I was growing tired of listening to the ceaseless stream of nonsense about the Leader and seeing all those god-awful militant revolutionary monuments, and so I finally began to tune it all out.

Besides, I was more interested in the far-off view of the Pyongyang cityscape, with its enormous pyramid hotel that towered over everything. That strange black pyramid–that heartless shell–would begin to show up in more and more of my photographs. It mesmerized me. It lured me in. It was slowly becoming an obsession. 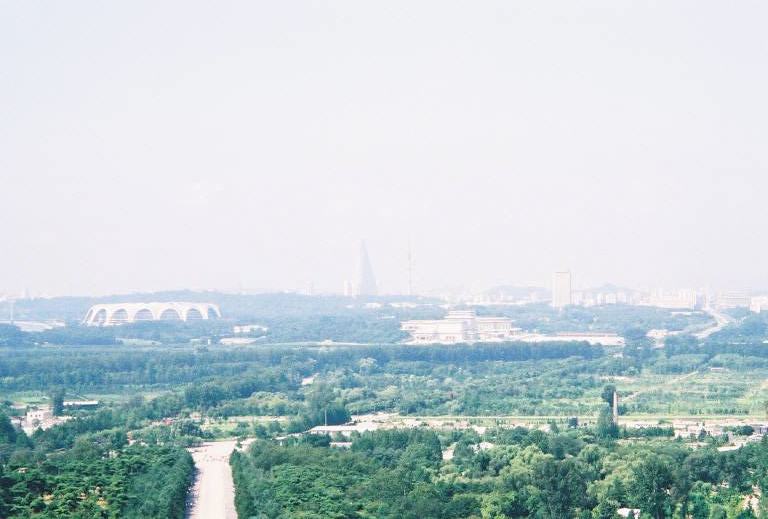 On the way back from the hills we drove past the former Presidential Palace of Great Leader Kim Il-Sung. According to an Australian businessman who joined our group from time to time and who does business with the regime, it was just one of several residences maintained by the Great Leader. Today it’s a mausoleum where, thanks to the same Russian technology that brought us the eternal remains of Lenin and Chairman Mao, Kim Il-Sung’s embalmed corpse is on permanent display.

Masses of local people were lined up in the entrance courtyard to file past the Great Leader and give the respectful “one-time bow”, but unfortunately this wasn’t on our itinerary. Apparently foreigners can be admitted, but it’s difficult and must be arranged far in advance. 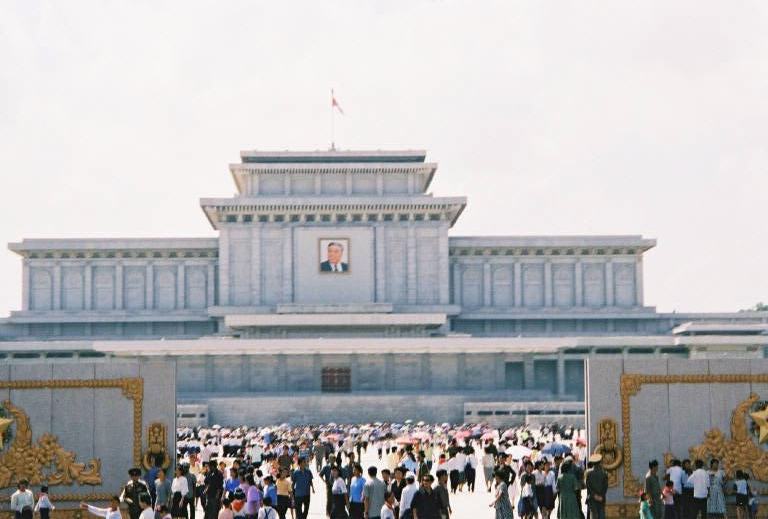 The Australian businessman also told me that no one knows where the current leader Kim Jong-Il lives. He’s believed to move around between several residences for fear of assassination, and to have many mistresses.

I decided to test this notion with our minders later that day.

“Where does the Dear Leader live?” I asked, my voice tinged with the appropriate tones of respect. “And does he have a family?”

Both times the answer was a brisk “I don’t know.”

They either really didn’t know—which I suspect is the case—or they weren’t permitted to discuss it with us.

I found that rather strange. As recently as a month before my visit, the Asian edition of Time magazine published an old family photo of Kim Jong-Il with his wife and kids. His eldest son had been picked up at Tokyo’s Narita airport while trying to sneak into Japan on a false passport in order to visit Tokyo Disneyland. The existence of his family was common knowledge in the outside world, but it was apparently a state secret within the country. I got the impression that to even speculate about it was forbidden.

I was bursting to tell our minders all about the Tokyo Disney bust, but slighting the Leader even innocuously was the one thing which would have gotten us in serious trouble in North Korea, and that was certain to place our lives at risk.