Liechtenstein is a strange place. It’s a monarchy ruled by a prince in the middle of Europe, landlocked in the Alps between Switzerland and Austria. At 62 square miles it’s the 6th smallest country in the world, but has the world’s second highest GDP per person thanks to it’s status as a tax haven.

It’s the sort of anomaly on a map that people pop into for an hour, just to say they’ve been there.

It was my second time in the principality, and in many ways it marked a return. I had unfinished business with the surrounding peaks.

I went there once in 2008. I coached a fitness seminar in a neighboring region of Switzerland, and had scheduled a free day to do some hiking. I chose Liechtenstein for the same reason so many others do — I wanted to check off a weird place on the map. But I also wanted to hike a trail called The Fürstensteig, by reputation the most extreme trek the region had to offer. Who in their right mind wouldn’t be attracted to a thin trail clinging to the edge of a massive rock face that drops all the way to Switzerland?

Unfortunately the friend I was traveling with wasn’t crazy about heights and we had to turn back after our first glimpse of the vertigo view.

I’ve thought about that trail ever since. And last week I took the first possible opportunity after moving to Europe to revisit this strange little place and hike it’s peaks.

I arrived in the evening, when Liechtenstein feels a lot like a zombie film. Not a ghost town, because it’s the farthest possible thing from a run down shambles. Everything is incredibly neat, tidy and organized, but there’s just no people. It’s the quietest country I’ve ever been to. When you finally do see a person in the distance, no one shouts. Instead, they walk over and speak in low voices. Liechtensteiners make ME seem noisy. It’s my kind of place.

The weather was good on that first day, and I spent 10 hours climbing and walking in the rarefied air. I started from Gaflei and the treacherous Fürstensteig, with dizzying views of the Rhine and Switzerland on the far side. Then onwards through a hidden valley to the peaks of Kuegrat, Garsellikopf, and finally the Drei Schwestern (the Three Sisters), which made the sheer rock face of the Fürstensteig look like a gentle stroll. Clouds swept in just as we left the peaks. As we descended those last two hours down to the village of Planken a gentle rain began to fall, filtered through forest and moss and the green light of undersea. 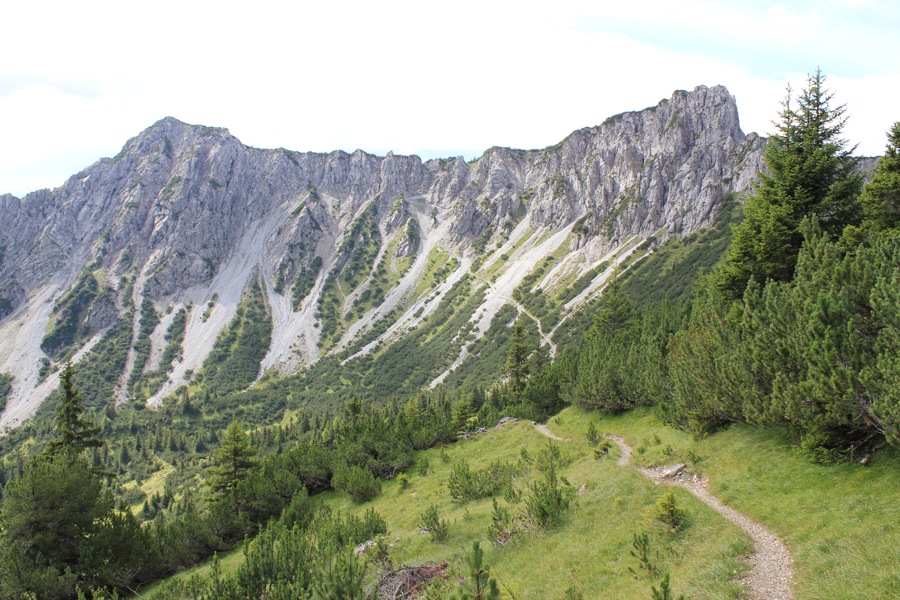 My head is still filled with the things I saw…

Views of the Alps in staggered row upon row, vanishing into an Austrian distance.

A hidden valley that cradled a little cabin all alone on the slope of a high Alpine meadow. What would it be like to spend a season down there, like Thoreau at his pond or Kerouac in Desolation Angels?

A shouting voice heard across a broad valley as a caterpillar of people wound its way up a switchback trail, grouped as close together as the segments of an insect. Why would anyone want to experience the mountains that way, face to ass with the timid person in front of you, making your way in a long chattering train?

Finally, the total silence of Garsellikopf. Just the sound of the wind sweeping over the peak, and Lake Constance in the far distance, with hazy views of Germany.

I put together a short video so you can join me in this magical place and appreciate its solitude. I hope you enjoy it.