I read something like 100 books a year. All sorts of stuff, from travel literature, history, fiction, classics, philosophy and memoir. And I like to end each year with a quick wrap up of what I liked best.

These are the books that stood out for me in 2013. Have a look through the list, and pick up a few. You won’t be disappointed.

Weeding out the best from the borderline — so you don’t have to!

First up, travel literature. I’ve got two classics and one “modern classic” to recommend…

You absolutely must give this one a read. Even if you don’t think you’re curious about this incredible place.

Wheeler spent 7 months in Antarctica as the first foreigner to join the American National Science Foundation’s Antarctic Artists’ and Writers’ Program. She stayed as a guest at the bases of several different countries, visited scientists at field camps, camped on the ice and experienced life on this mysterious continent in both summer and winter.

The details of how these bases function is interesting enough. But the people they attract are even more fascinating. Like all great travel books, Terra Incognita is an inner journey as much as an outer one.

News From Tartary by Peter Fleming

Fleming and Swiss writer Ella Maillart set out to travel overland from Peking, China to Kashmir, India in the 1930’s — an unstable time when China’s Communist insurgency was on the rise, and the far west province of Xinjiang was well beyond the control of the capital. Fleming’s account of their journey by horse and camel is sharply observed, brilliantly funny, and the dangers and hardships are always understated.

I traveled some of that same territory in 2002, so I thoroughly enjoyed reading about Xining, Qinghai, Kumbum monastery, the southern branch of the Silk Road on the far side of the Taklamakan Desert, Khotan and Kashgar, and more. Those regions felt like the most distant frontier even ten years ago, when China was rapidly bulldozing and resettling anything that makes them unique. It was nice to see from Fleming’s account that, despite their sad political fortunes, the essential character of these people and places remains the same.

An outstanding work of travel literature. 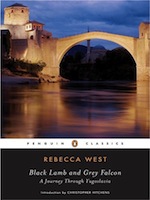 Rebecca West travelled through all regions of the former Yugoslavia on the brink of World War II. Her brilliant 1,100 page account is a journal of her travels, a cultural commentary and a history of the region rolled into one.

Black Lamb and Grey Falcon is a travel classic that many people talk about, but few people seem to have read. I guess they’re intimidated by the size of the book. Yes, it’s dense. And the introduction is enough to scare anyone off. Skip that part and get right into the book. West’s writing style provides for an enjoyable read. Her observations are funny as well as tremendously insightful. And you’ll come away with a better understanding of a fascinating region that’s often overlooked on today’s Euro-tour itineraries.

This is also essential reading for anyone studying the causes of the First and Second World Wars. I’ve travelled a big chunk of this territory, and reading this book made me want to go back and explore the rest.

Click here to check out Black Lamb and Grey Falcon

There’s lots to interest you here, from psychology to biography to a little bit of history…

This one’s a bit dated given that attitudes have changed since it was written in the early 1970’s. But I think Sheehy’s observations are still widely applicable, at least to my generation.

Passages gave me some interesting insights into the 40’s decade that I’ve somehow slipped into. And it brought back so many memories as well. I spent a lot of time looking back at my past as I read, and I can confirm that the major turning points and crisis points of my life fit quite accurately into the pattern that the author sets out. But of course I never realized it at the time…

I posted a more extensive article about Passages on my blog. It’s called “How to Make Sense of Your Life’s Turning Points”. Check it out!

This is excellent reading for anyone working on creating the life of their choice.

Amateurs in Eden: The Story of a Bohemian Marriage: Nancy and Lawrence Durrell by Joanna Hodgkin

This new biography of Lawrence Durrell’s first wife Nancy — written by her daughter from a later marriage — sheds an interesting new light on the Lawrence Durrell myth, and fills in many new details about those all important Corfu years.

But more than that, Nancy Durrell was a fascinating person in her own right. This book will appeal to anyone who enjoys a good life story, whether or not you’re interested in Lawrence Durrell’s work. It’s a wonderful tale of two people who tried to create an interesting and highly original life for themselves.

How to Live: A Life of Montaigne in One Question and Twenty Attempts at An Answer by Sarah Bakewell

What is the best way to live? That’s a question Michel de Montaigne set out to answer in his diaries: free flowing explorations of his thoughts and experiences.

He called his work “Essays”, coining a new term that has become the dread of high school students everywhere. But Montaigne is never boring or predictable. Four hundred years later, he continues to fascinate us, and to offer us helpful advice that we can apply in our lives.

In this book, Sarah Bakewell has done an amazing job of coming to grips with a fascinating individual. What a great way to approach a “biography” — by way of the man’s work and ideas, and the other writers and readers whose lives his work rippled out to touch. It’s also a great example of why writers like Montaigne are still so relevant — and so necessary — today.

I’ve done a number of expeditions by camel — both dromedary and Bactrian. And I like to think I’m fairly well read in the lore of this noble beast. Well, I learned a pile of new camel facts yesterday when I cracked open the cover of Camel by Robert Irwin.

I posted a longer article about camels — and this book — on my blog. It’s called “Bet You Didn’t Know THAT About Camels!”. Check it out!

Empires of the Sea by Roger Cr0wley

This is an exciting fast-paced galley row through some of the most gripping events in central Mediterranean history. And Crowley brings the main characters to life with the skill of a novelist.

This book was of interest to me because it provides an exciting and detailed account of The Great Siege of Malta. Much of that story played out 5 minutes from my house. I could read about these heroic events, and then hop in my car and inspect the remains of the fortifications for myself. Visualizing an ancient battle doesn’t get much better that that!

But The Great Siege was just one part of a much larger story: the decades-long battle between the kingdoms of Christendom and Ottoman Islam for control of the Mediterranean, and of Europe. Our world could have been a much different place, if not for the Battle of Lepanto…. Read this story and you’ll understand why.

Click here to check out Empires of the Sea

Finally, let’s talk about made up stuff.

When it comes to fiction, I tend to read a lot of classics. I figure if something’s still being read after this long in print, it’s probably worth my time. But I also read more recent stuff too. Here are a few non-classics that really stood out for me this year.

The Lantern by Deborah Lawrenson

The Lantern is set in a mysterious old farmhouse in Provence, France. And that location permeates every page, the way the sun soaks through the olive leaves and lavender fields of the south. The narrative plays out in two parallel stories that alternate chapter by chapter, eventually converging at the end of the book. It’s perfectly paced, and each chapter left me helpless to resist turning the page to see what happens next.

How much of your personal narrative is true, and how much a “self-protective coating” to help you cope with your past? “Everyone has them,” Lawrenson writes, “not only the people who have survived terrible families, though clearly they will have a larger canon than most.”

This is a beautifully written book, with not a stone out of place.

I posted a longer review of “The Lantern” on my blog. Check it out!

I’ve read everything of Murakami’s that’s been translated into English. I like his style. I like the characters he creates — sophisticated urbanites who like good music and fine drink, but who live on the fringes of society. And I love reliving my Tokyo years in every page of his writing. I just wish someone would translate Murakami’s travel books too!

This novel is set in Tokyo in the year 1984. But the main characters are soon drawn into a strange parallel world — the world of “1Q84”, in which Q stands for a question mark. A tangled web of connections draw them closer and closer, and the mystery deepens as they unravel new layers of themselves alongside the events they are trying to understand.

Don’t start this book if you have an important test to cram for or a deadline of any kind. I guarantee you’ll ditch it all, just so you can read another page.

Impeccably written. Incredibly insightful and perfectly observed. This is the story of a middle class housewife and mother who, to the eyes of outsiders, is living an ideal respectable life.

The entire story is told in a sequence of images, vignettes, and fragments of conversation. They aren’t connected in a linear narrative. Instead, the author builds a symphony of detail that reveals a life, one careful note at a time. Looking back, I see how he did it. But I don’t know how he pulled it off.

Mrs. Bridge has been hailed as one of the greatest novels in American literature. And it’s about the closest thing I’ve read to a perfect novel. What a brilliant piece of craftsmanship. And an excellent read.

So that’s it. My top picks from the mountain of books I read in 2013. I hope you find something meaningful for you.

And speaking of books, this is a great time to pick up a copy of MY book Vagabond Dreams!

If you haven’t read it yet, you’re seriously missing out. Make that your New Year’s resolution. It’ll start you off on a life of exotic foreign adventures. And nothing will ever look the same again.

If you have read it, please post a review on Amazon. I’d really appreciate it.