The British overseas territory of Gibraltar guards the entrance to the Mediterranean. The landward side of the peninsula borders the Spanish province of Cadiz. It’s a rather contentious border, and if you stretch it a bit I guess you could call it one of the last potential flashpoints in Western Europe.

That’s what Spanish politicians would have you believe, anyway.

I drove there from Conil de la Frontera during my recent Andalusian explorations. We left the car at an underground lot in the city of La Linea de la Concepcion, two short blocks from the border. I already knew what Gibraltar looked like, partly from photos and partly from those annoying insurance commercials on TV when I was a kid (“…get a piece of the Rock…”). But I never expected it to be so huge.

We presented our passports and headed across the runway on foot. 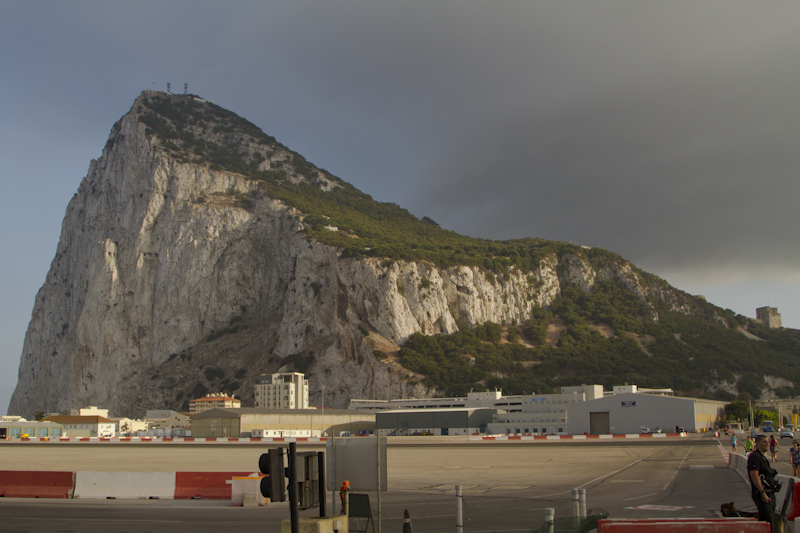 The peninsula is just under 7 square kilometers in area (2.6 sq mi), but the massive limestone peak looms 426 meters (1,398 ft) above the surrounding coastal lowlands. Moist Mediterranean air hits its steep rocky face and is driven straight up, where it forms clouds and tumbles down the Atlantic side.

The northern half of the Pillars of Hercules — so called after the Greek legend of Hercules creating the Strait of Gibraltar at the entrance of the Mediterranean — has been inhabited since ancient times.  Neanderthal remains have been found in Gorham’s Cave. And the Phoenicians, Carthaginians, Romans, Vandals and Moors all left their footprints here.

These days Her Majesty the Queen rules this rocky roost — much to the chagrin of Spain.

Gibraltar was ceded to Britain “in perpetuity” under the 1713 Treaty of Utrech. And “perpetuity” is a mighty long time. The base of the Rock is densely populated, with approximately 30,000 Gibraltarians, as well as other nationalities.

It used to be an important base for the Royal Navy, bent on projecting it’s sea power around the globe. But today Gibraltar’s economy is dominated by tourism, offshore financial services, online gaming and shipping.

Every Gibraltar resident that I talked to expressed a profound dislike and mistrust for Spain. They want to remain part of the UK. And they resent Spain’s closing the border or encroaching on their territorial waters to prove a political point.

The Territory’s most famous residents are probably the “apes of Gibraltar” — a huge colony of Barbary Macaques that rule the nature reserve which covers the upper Rock. They’re the only wild monkeys found in Europe. And legend has it that if they leave, the British will too.

For the most part, the apes go out of their way to avoid you. But don’t leave any food or drink bottles sticking out of your bag. They’re very bold thieves.

The Rock itself is honeycombed with tunnels and rooms, most of them built during WWII (many by the Canadian Army). I knew about the fortifications. But I had no idea they went so far — around 55 km of them. Some are large enough to drive military trucks through.

It was an underground city, complete with massive water reservoirs,  a telephone exchange, hospital, bakery, power station, military workshop, and housing for a 16,000 strong garrison. The entire thing is naturally ventilated by the prevailing winds through a series of shafts.

These days many of the tunnels are still owned (and used) by the Ministry of Defense. A lot of others are considered unsafe to visit. But a few are open to the public, including some that were used in WWII.

The peak is an incredible place to walk around, and it’s filled enough natural and historic curiosities to easily occupy you for a full day.

You can stand at the top and watch the clouds form as the winds surge up towards you. And that was exactly how I ended my day. 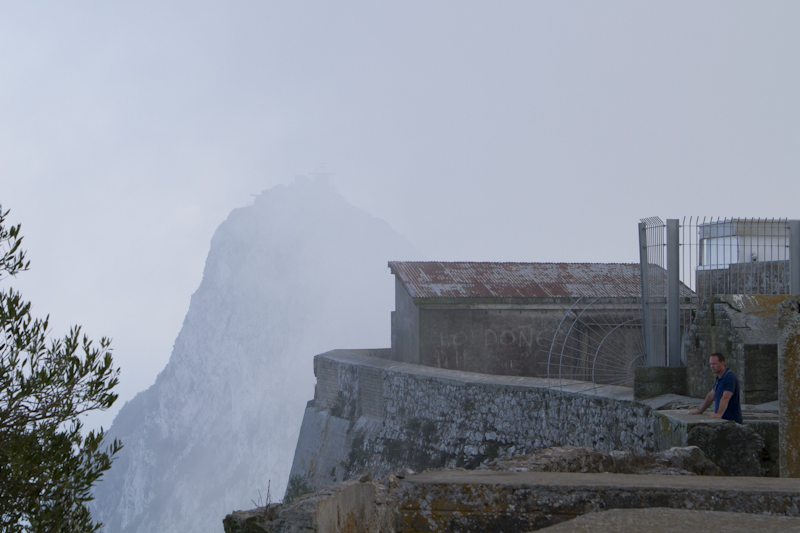