The Philosopher and the Wolf is a profound and original book. But I never would have found it if it hadn’t been recommended to me. 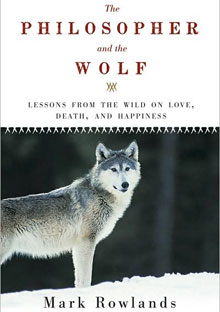 Even after I ordered it, it sat on my shelf for over a year before I finally picked it up.

I can understand why the back cover copy didn’t grab my attention, because this is a rather difficult book to describe. It’s not quite an autobiography, because the author is often overshadowed by the wolf, and neither of them is the main character. It’s not quite philosophy — although Rowlands presents complex theories with a brilliant ease that makes them applicable to everyday life. And it’s not quite a nature book, either.

And so we’re stuck with that vague catch-all term “memoir”. But this feels unsatisfying somehow. Because to me this book is so much more…

The Philosopher and the Wolf is a beautiful and often hilarious story about a man’s relationship with a wild creature who became his friend and brother: Brenin was “…an extraordinarily well-travelled wolf, living in the US, Ireland, England, and, finally, France.”

And because the wolf’s penchant for property damage meant he couldn’t be left at home alone, “He was also the, largely unwilling, beneficiary of more free university education than any wolf that ever lived.”

Rowlands was a philosophy professor, and so he brought his wolf to work with him. Brenin sat beneath his desk each day, through all his lectures. And their constant companionship forms the underlying thread of the story.

The prose is crisp and powerful. And Rowlands’s honesty — both about himself and his struggles — is admirable, and sometimes painful to read.

This passage about the author’s reclusive misanthropic tendencies really spoke to me:

“There is something lacking in me. And, over the years, it has slowly dawned on me that the choices I have made, and the life I have lived, have been a response to this lack. What is most significant about me, I think, is what I am missing.”

He attempts to come to terms with these realizations through the lessons that his friendship with Brenin have revealed to him.

But to label this book as a memoir would be to ignore so much else.

The Philosopher and the Wolf is also about ourselves as a species: the ways in which we differ from the creatures around us. And how our simian cunning and deceptiveness gradually shaped our worldview in ways that set us on a developmental path which veered sharply from that of other animals.

And The Philosopher and the Wolf is also about our constant search for happiness. In one of the most moving chapters of the book, as Rowlands struggles to come to terms with Brenin’s death, he writes:

“The human search for happiness is regressive and futile. And at the end of every line is only nevermore. Nevermore to feel the sun on your face. Nevermore to see the smile on the lips of the one you love, or the twinkling in their eyes. Our conception of our lives and the meaning of those lives is organized around a vision of loss. No wonder time’s arrow horrifies us as well as fascinates us. No wonder we try to find happiness in the new and unusual — in any deviation, no matter how small, from the arrow’s path. Our rebellion may be nothing more than a futile spasm, but it is certainly understandable. Our understanding of time is our damnation.”

And in the end, The Philosopher and the Wolf is about how to find meaning in a life that doesn’t have an intrinsic meaning of its own.

Rowlands’s life with Brenin taught him what he was made of in his greatest — and most painful — moments.

And this is something that not even time or futility or the void can take away from us. “What is most important in your life is the you that remains when your hope runs out.”