I’ve always gotten a lot of comments about the book cover of Vagabond Dreams.

It really jumps off the shelf, and I loved it the first time I saw it. I thought you might like to know some of the symbolism behind it. 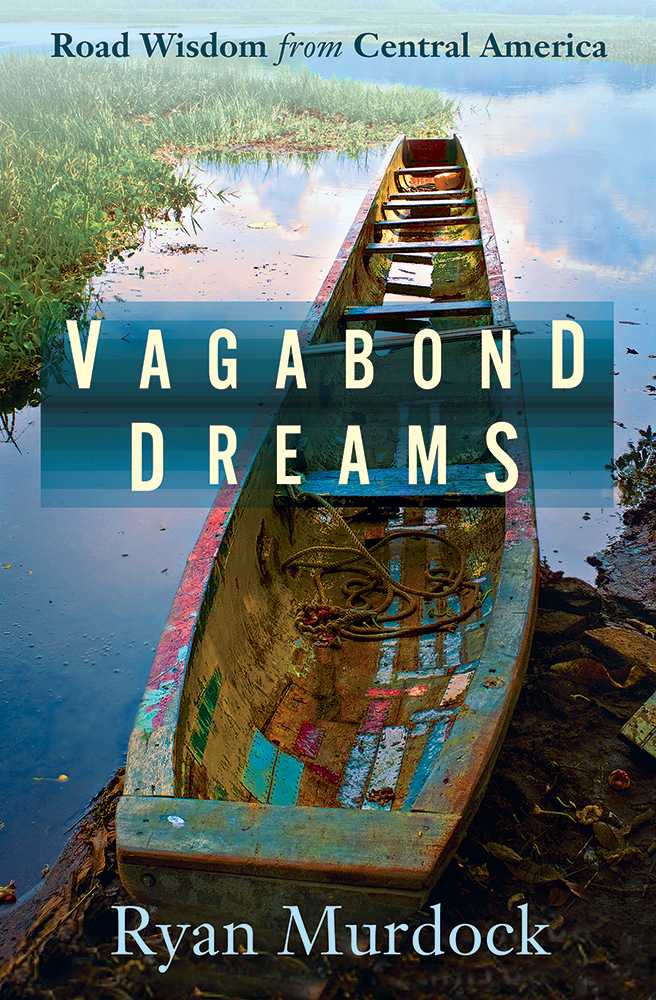 The first element that jumps out at you is of course the boat.

There’s a riverboat journey by dugout canoe near the beginning of the book, but that was really just the first act in what would be a long series of challenges and personal revelations.

However, there was also another watery journey in the latter half of the story that played a major practical and metaphorical role. I travelled by riverboat down to the Mosquito Coast, and then by freighter to the Corn Islands. And I eventually travelled back up that river again when I made my return to the “real world”

I wrote about the symbolism of river journeys, and how they almost always portend great change. And this powerful image captures it perfectly.

The boat on the cover points toward the open water, and it narrows at the end like a road running off to the horizon, drawing your eye ever outwards.

As your eyes trace the length of the boat, you notice that the colours are darker in the foreground — towards the present — and brighter and more optimistic in the direction of the journey.

And the distance is hazy, almost like the prow is pointing into a dream.

Dreams are an important element of my story. The book’s title is the first clue, and the chapter names all have a dream feeling to them too.

And if you’ve read it, you’ll know that the entire Mosquito Coast / Corn Island segment could be seen as a journey to a liminal place. A place that’s sort of unreal, or perhaps one that exists both inside and outside you, a zone of overlapping realities where the archetypal is just as real as the rock I just stubbed my toe on.

In that sense it’s similar to the Medieval Grail myths, where the knight crosses over to an island with a mysterious castle, has adventures, and returns to the world with his new knowledge or magical cure. When he comes back, the castle and island vanish behind him.

Our island was a little bit mythical too, and it did feel like my friends and I stepped outside of time. That was the place where so many of the subconscious lessons of my journey were realized. And coming back up the river on that slow boat felt like my return to the world.

The book’s cover design totally nailed that feeling, and it gave me a deeper understanding of the story I’d told.

I love the boat in the image. The colours and patchwork pieces feel well worn and cherished. Like it’s been many places with its owner, it’s come through some stuff and returned safely, and it’s been cared for and lovingly patched up each time.

Taken as a whole, the cover captures the feeling of a Road or a journey — not just because of the dugout canoe or the fact that it points to open water, but because of the suggestion of distance and movement hidden in the converging lines of the boat itself.

The artist managed to call up that feeling without using the cliched image of a road leading off into the distance.

And speaking of the artist, my cover designer was none other than the award-winning George Foster. And believe it or not, he nailed this on the first draft.

I’ve worked with a number of web design pros and graphics people when creating products for my online business, and in each case they just made images according to my directions. It was a very linear and mechanized process.

But working with George was completely different.

He took a piece of art that I created, felt its message, and created his own work of art in response to it. It felt like a musical jam session.

“The feel I went for here is expansive emotion/spirit within the ordinary,” he said. “The silence of the image is perfect with the title.”

Grab it from your shelf and take a look at it. I’m sure you’ll see what he means.

What’s that? You don’t have a copy?

I hope you’ll click over to Amazon and pick one up today.