The desert is on my brain these days…

I’m gearing up for a big expedition to the Tibesti mountains in northern Chad. And I’ve been going through my library of Sahara books as the anticipation builds.

I want to share one of my favourites with you today. It’s called Operation Salam. And one of the  coauthors, Andras Zboray, is a good friend.

I traveled with Andras to the remote Jebel Uweinat back in 2013. And we’re about to set out again on another adventure. Andras knows the Libyan desert better than anyone since Bagnold. And he’s the perfect person to tell this tale of his fellow Hungarian, the explorer Laszlo Almasy. 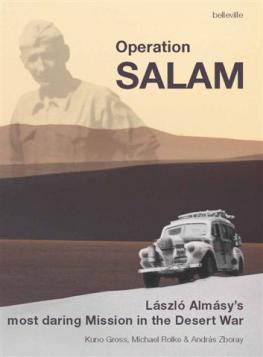 Most people know of the Hungarian explorer Laszlo Almasy from the highly fictionalized and rather imaginative portrayal of his exploits in the Michael Ondaatje novel The English Patient, and its massively successful Hollywood film adaptation. But there’s more to his story than will ever be told at the movies…

Operation Salam deals with what must be Almasy’s most daring expedition: a mission to drop off two German spies on the shores of the Nile, right into the heart of British-occupied Egypt, and thousands of miles behind enemy lines.

Almasy set out from Italian-held Libya, narrowly evading Allied patrols near Kufra. He snuck into Egypt through a gap in the Gilf Kebir that he had discovered several years before. Along the way he snapped photos of the desert, and paused to show his companions the prehistoric paintings he’d discovered at the Cave of the Swimmers.

He crossed thousands of miles of the Sahara’s most arid stretch with his little group: undetected, self-supported, carrying all their own rations, petrol and water. And his skill took him safely to the Nile and back — right through the backyard of the British Long Range Desert Group.

It’s a gripping tale filled with excitement, danger and the wonder of the desert. And the authors have searched through every available source — including MI5 files and secret intercepted messages deciphered by Allied code breakers — to piece together the most accurate play-by-play account of one of WWII’s least-known but most incredible adventures.

This is a meticulously researched book, put together by men with extensive desert experience. And they didn’t just track down every last possible document from the archives, either. They also retracted the route of the journey, and the book’s incredible collection of historic photos are supplemented with modern colour prints taken in those very same remote regions.

Readers who are new to the history of the Libyan desert will also find helpful geographical sidebars on places like the Gilf Kebir and the Great Sand Sea, as well as extensive summaries of little known events in the desert war, like the Kufra Convoys.

This is the definitive account of Operation Salam. And it’s a fitting tribute to a brilliant desert traveler.

Laszlo Almasy has been portrayed as everything from a skilled scientist-explorer to a devious Nazi spy. But I think the reality is much closer to what Andras and his coauthors have uncovered in this book: “He belonged to a rapidly disappearing breed, the romantic gentleman-adventurer, driven by a deep passion for the desert and the unknown.”

This is essential reading for any Sahara enthusiast.

Click over to Amazon and grab yourself a copy.