I promised to tell you how we navigated the Baltics and Scandinavia without any air travel on this 7 week journey.

We drove through Lithuania, Latvia and Estonia, of course. But when the time came to cross the Gulf of Finland, I chose to travel by Baltic ferry.

These massive ships ply the waters between all the major capitals and ports in the region, with multiple sailings a day to anywhere you’d care to visit. It’s a civilized way to travel, with space to walk around and a cabin in which to sleep. And you always have time for a drink and a book.

Our first encounter with this mode of travel was the short 3 hour passage between Tallinn and Helsinki. We boarded a ship of the Tallink Line early one morning after Midsummer’s Eve, and settled into comfortable seats in the lounge.

There were only two other passengers. The rest had opted to wander the decks on the cheapest tickets, or to pay slightly more for a reclining seat in the forward cabin. The business class lounge didn’t cost that much more. And it promised a quiet atmosphere to work, and free drinks and snacks.

I sipped a hot coffee and opened my book. The boat came alive with a deep vibration that shook the walls and rattled the metal tiles in the ceiling. It settled as we picked up speed, and we were soon sliding across the Gulf of Finland towards an entirely new culture and a new set of countries. But that first sea journey was just a taste of what those northern waters had in store for us.

Our second sea journey was an overnight passage on the Viking Line, from Helsinki to Mariehamn in the Åland islands, aboard the M/S Mariella.

The common areas of the massive ship resembled a floating duty free shop. Many people booked deck passage and sat up all night, dozing on the padded sofas, binge drinking in the lounges, and gambling away all their money in the on board casino.

Alcohol is expensive in Scandinavia, and the shops on these boats are known as a place to get some incredible deals. Such is the lure that many people used to make the short trip by boat from Sweden to Denmark simply to stock up on booze. But now that these countries are part of the Schengen Zone, only the Åland run still promises incredibly cheap tax-free drinks.

We boarded quickly and efficiently, unlike in Tallinn. And we soon found our small cabin on an upper deck. I had booked and pre-paid dinner at the only sit down — non-buffet — restaurant on board, so we just had time to drop our things and change.

But first, there was an incredible view to attend to…

I wanted to stand on the top deck and watch how the captain threaded the gap between the islands and the sea fortress of Suomenlinna. It was only the day before that we were sitting down there on the grass, taking in the opposite view.

When the last stoney bastion had slipped into the hazy distance and Helsinki was behind us, we went inside and made our way to the restaurant we’d chosen. We were given a window seat, with views of the receding Finnish coast.

I ordered a bottle of German riesling, and we began what was to be a full 7-course fish meal. Outside the window, a thick fog rolled in. The ship slid through calm waters and glowing mist without any perceivable motion, save a deep rumble felt through the deck. At times the mist was so obscure that I couldn’t even see the glow of the northern sun.

When we had eaten all we could possibly consume, we wandered back down to our cabin to catch a few hours sleep. It was a comfortable room with a real double bed, a shower, internet and movies on TV.

I slept very peacefully, but I woke sometime during the disconnected dead of night, probably after we’d left the Gulf of Finland and entered the open Baltic Sea. The boat was creaking and shifting from side to side, and I felt a deep shudder right beneath my porthole as waves slapped the metal hull and sent up a blast of spray.

And then I fell asleep again, rocked into oblivion by the regular motion of our passage.

We were roused to a painfully groggy state by a ship’s announcement in the predawn hours. Our ship arrived in Åland at 4:25, where only ourselves and five other passengers disembarked. Everyone else was sleeping soundly by then, and they probably never even noticed the brief halt, or felt the ship make a tight u-turn and slide back out of the harbour, to the open sea and Stockholm just over the glowing horizon.

We spent a couple peaceful days on Åland, and I’ll tell you about them in another blog. But we’re talking sea travel here, so we don’t have time for it now. And when it comes to Baltic ferry experiences, I had saved the best passage for last.

We boarded the M/S Cinderella for the 6 hour journey from Åland to Stockholm. The journey was only 6 hours long, but I had booked a cabin again, with the idea of getting a few hours sleep.

The jetty was empty when we arrived, and we were able to walk straight on board. I had opted for a better class of cabin this time, since it was available. But I didn’t realize there were only 4 of this type, and they were positioned at the front of the ship.

Our berth wasn’t listed as a suite, but it should have been. We had a large living room with sofa and desk, a big queen sized bed, and a shower as well. The fridge held small bottles of the ship’s champagne. And the windows held a view that banished any notion of sleep from my head.

The front of the ship sloped, and the windows did too. Our cabin was immediately below the bridge, and when I pulled up a chair and put my feet on the broad sill, I had the same view as the captain above us.

We went to the top deck to watch the last of the Åland archipelago slip away. And then I stopped at the duty free shop, where I purchased a box of liquorice pipes, a small bottle of Drambuie, a collection of Swedish aquavit, and a 2004 Dom Perignon — all for €120. 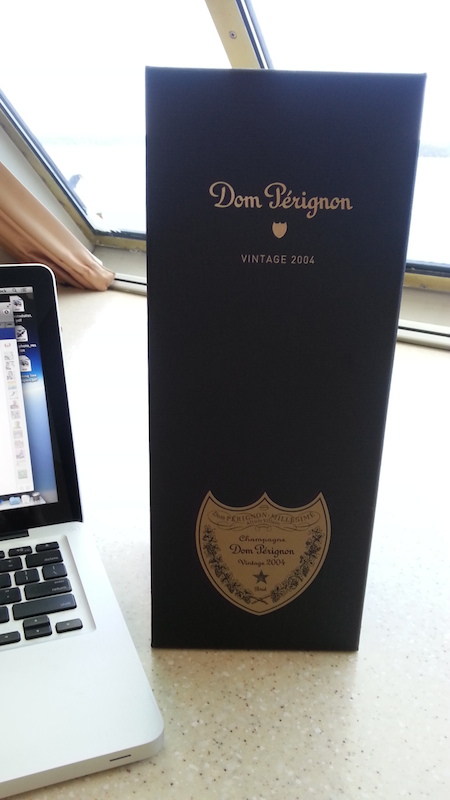 The open sea crossing only lasted for the first hour, and then we entered the Stockholm archipelago.

I poured a glass of the ship’s champagne and pulled up a chair in front of the massive windows. And I didn’t leave that spot until we had docked at the Viking Line terminal in our destination.

Sometimes we cruised through a broad channel, among islands and cottages and holiday boats. And sometimes we reduced speed as another big Baltic ferry approached, so we could take turns passing through a gap.

The journey was a geographical wonder, and it went on for 5 more hours. That view, and the peaceful cabin, turned out to be one of the highlights of our entire trip.

If you go to this region, try to book passage on the Cinderella. And pay a little more for one of those forward cabins.

These are maritime countries with a maritime history, and if you want to connect to their Spirit of Place, you really must approach them by sea.