My northern journey continued by boat from Helsinki to the Åland islands. I wrote about our adventures there in Outpost magazine Issue 107 Sept/Oct 2015. I hope you grabbed yourself a copy: 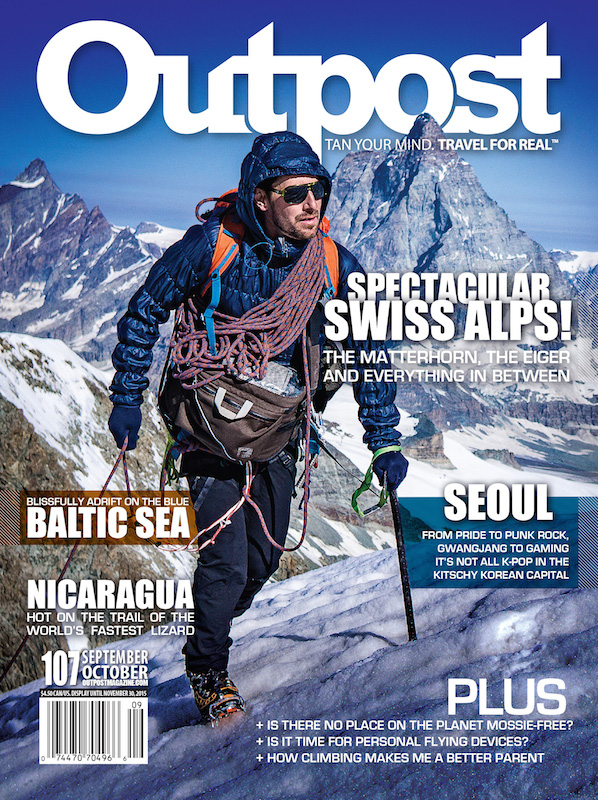 From Åland we sailed on to Sweden, threading our way through the Stockholm archipelago and approaching the city from the waterline. I think it was meant to be visited this way, because it is a nautical town that always smells of salt water and green shores.

Stockholm is one of my favourite cities in Europe. It’s spread out over several islands and channels, and you won’t find a more beautiful setting on a sunny day.

We rented a lovely flat in Södermalm, a vibrant neighbourhood of cafes, bars and shops. And we spent our days eating pickled herring, sipping aquavit, and wandering the streets under perfect summer skies.

I took Tomoko to see the Vasa Museum, where the warship Vasa, which sank in the harbour in 1628, has been raised and preserved in a fragile state of equilibrium, caught somewhere between temporary surcease and decay. That first glimpse of the ship as you walk through the door is an unforgettable experience, and it stopped me in my tracks just as suddenly the second time around.

We explored two excellent exhibits at Fotografiska, the main museum of photography…

We gorged ourselves on seafood at the Grand Hotel’s famous smörgåsbord, and I treated myself to a glass of vintage armagnac…

And we spent a lot of time just walking around.

Our flat was three blocks away from Pet Sounds, the city’s coolest record store. My friend Marty Willson-Piper — former guitarist of The Church — spends part of his time there advising customers and connecting people with songs.

The guy is an absolute encyclopedia of music, and if you’re into the more obscure corners of the world of rock, you really must check out his blog: In Deep Music Archive. It’s a great place to discover new music you love, but might never have found.

Our footsteps led us back to this vinyl mecca so many times during our stay, and always when the shop was closing and it was time for the evening meal.

Marty introduced us to several great restaurants right around the corner, and to musicians and music producers, and other cool people who are doing interesting work. Our conversations continued late into the night, until the restaurant staff kicked us out. And then Marty would shuffle home to put in another hour or two writing about music for his global blog audience.

More than any other point on this trip, our stay in Stockholm felt like a period of residency. You’ll always feel differently about a city because you have friends there. It leaves a warmer impression in your mind.

But I think I also like this city so much because I feel a natural cultural affinity with the Swedes. The people we met are curious, intelligent and modest. They read and attend exhibits, and they have considered opinions about things beyond football and local politics.

That thoughtfulness extended to all areas of daily life. The people we encountered in the neighbourhood care about the products they consume, from fair trade clothing to natural soaps and organically farmed foods. And Södermalm is filled with small cafes offering home made treats.

I like how servers always have a strong opinion when asked which food they recommend. No one told me what I wanted to hear, or tried to pawn off a mediocre dish. They always said, “This one,” without hesitation, and it was clear that they ate and enjoyed it themselves.

I like their friendly, unpretentious nature, too. The owners of small shops are proud of the products they sell, and they’re eager to talk about them. Waitresses in cafes serve the customer with genuine interest rather than resentment at having to do a job. And even our waiter at the high end Grand Hotel was quick to offer his opinion rather than look down his nose at us in snobbery.

Now, these might seem like totally normal things to you. But on the Mediterranean island of Malta, where I live, I’m used to shopkeepers completely ignoring me — or gossiping loudly on the phone — when I walk into a store. I’m used to being lied to, or being told, “Don’t worry!” when I raise a normal objection to a questionable claim. I’m used to service that seems like an enormous chore for the employee. And I’ve stopped eating at high end restaurants, not just because of the consistently mediocre food, but also because of the condescending attitude of superiority that says, “You’re lucky to be here.”

Stockholm reminded me of everything I love about European life.

But most of all, our week in Stockholm was all about music. We weren’t just searching through vinyl record stores for that warm analog sound to take back home… The highlight of our week was a private acoustic “live by request” concert, in honour of Tomoko’s birthday.

Okay, perhaps “concert” is exaggerating things a little bit. We were just sitting around on the floor at Marty’s place, with a bottle of Tattinger champagne, shuffling through lyric sheets and requesting obscure songs from his enormous back catalog. But he played for 5 hours, just for our appreciative ears.

We discussed the lyrics and the craftsmanship. And we talked about his life when he wrote these songs, what they meant to him, and what they meant to us as listeners. Several of my choices even made it onto the setlist of his current US tour.

Now my friends are probably thinking, “It sounds like this was a present for YOU rather than Tomoko.” But we used one of Marty’s songs for the first dance at our wedding, and he played that one too.

I didn’t think this trip could peak any higher, but our musical interlude wasn’t over just yet…

Marty had tipped us off that Paul McCartney was in town, and we were able to get tickets right before they sold out.

We met up at Pet Sounds on our last night in town. Rain was pissing down from a leaden sky, but our heads were already filled with sunshine as we piled onto the subway with Marty, Nicklas from the prog-rock band Anekdoten, and a few thousand other people headed to the Tele2 Arena to listen to a man who changed the course of rock music, and who influenced pretty much everything you listen to today.

Me and Tomoko shuffled down to our seats at stage right, and the guys split off to find their seats too. Marty sent me gloating text messages from the VIP box while we waited for the lights to go down. But when Sir Paul strode onto the stage, everything else was forgotten.

It was an incredible show. McCartney’s voice was in fine form, and his energy, enthusiasm and professionalism were truly inspiring. Sir Paul played a beautiful version of The Long and Winding Road. Band on the Run overflowed with energy. Something was a highlight for me. And Live and Let Die built to literally explosive levels.

Maybe I’m Amazed — I was. Helter Skelter — what more could I say about that? And I have to admit Paul got a tear out of me when he played Let It Be and Yesterday.

Our little group reconnected again near the subway for the journey home. We talked about the show in a little Persian restaurant in Södermalm, right until closing time. And then me and Tomoko walked back to our apartment to chase a couple hours sleep.

The sun was already coming up when we walked home. But we had another boat to catch that morning — this time to the mysterious island of Gotland. And all these songs were playing in my sleep-fogged head the entire way there.