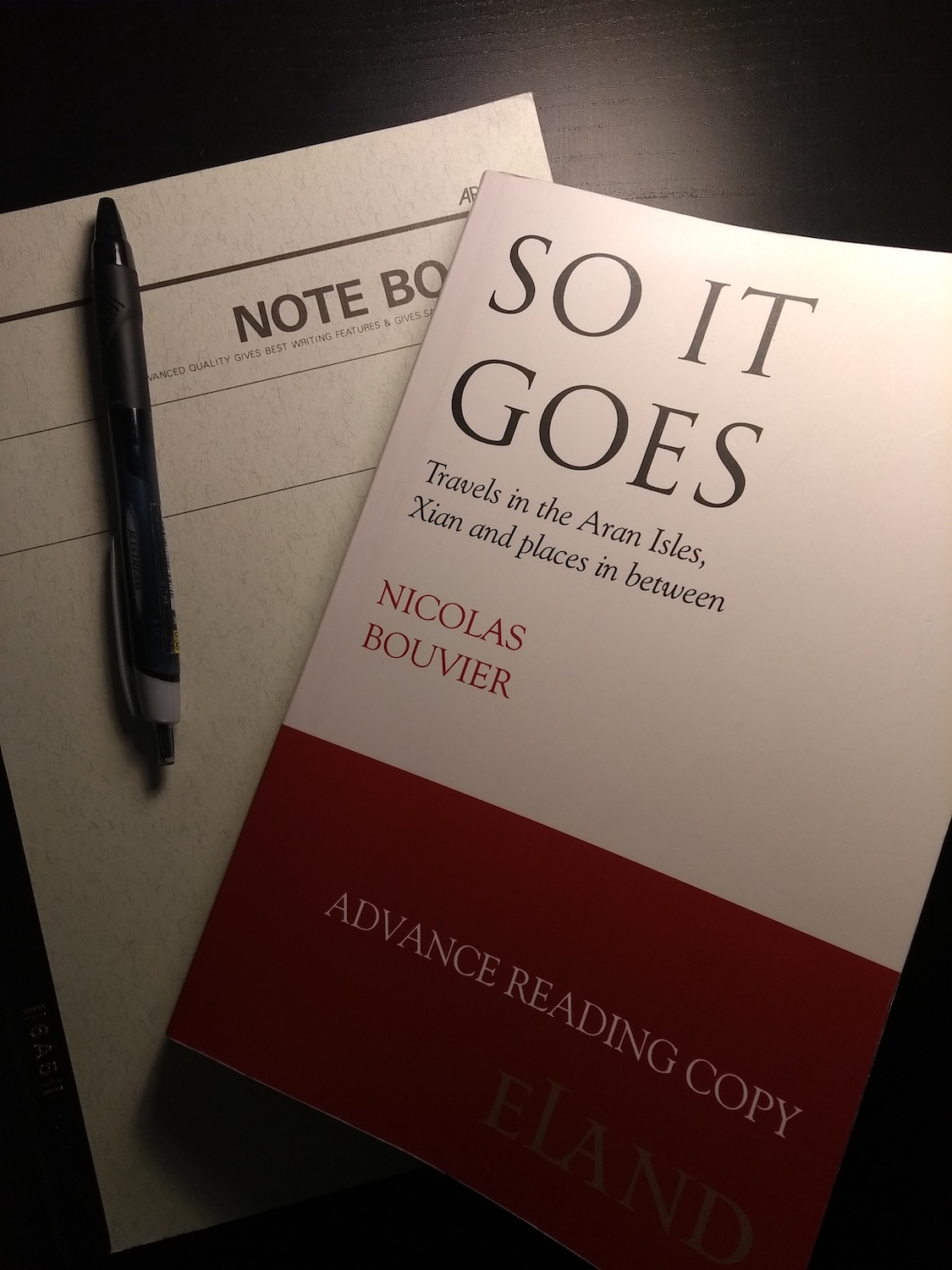 “So it goes” recurs like a refrain throughout this collection of essays, and I found myself wishing it would go on and on.

Nicolas Bouvier is one of those legendary writers whose name circulates among travelers, but few of my North American road friends had ever heard of him. It was European friends who told me about his classic road trip book, The Way of the World.

The twenty-four year old Swiss and his friend, the painter Thierry Vernet, fired up and aging Fiat and set out from Geneva in 1953, bound for the Khyber Pass. The journey was impressive — through Yugoslavia and Turkey, across Iran and Afghanistan, and into Pakistan — but the prose was unforgettable.

Here was a writer of rare curiosity, with a gift for capturing landscapes and people. As Patrick Leigh Fermor wrote in the introduction to that book, Bouvier “catches scenes and atmospheres with a painter’s eye and a poet’s ear.” His tale is told with curiosity, patience, and an impeccable comic sense.

When I think of the broad scope of travel literature, I think The Way of the World is to Europe what On The Road was to America. Each book captured the road trip possibilities of its respective continent, but the two books and the two writers couldn’t be more different. Kerouac captured the mad, rushing, jazz-infused energy of America, while Bouvier brought a gentle but rugged optimism, a subtle eye, and a prose as richly layered as the historical landscape he emerged from. His work should be more widely read among English readers.

Which brings me to this book: So It Goes. I went off on a long digression about Bouvier’s first book because you should really start there. You will be so thoroughly enchanted that you’ll track down all of his works which were translated into English. They are very few.

This new volume from Eland is the first work by Bouvier to be translated and published in English in over twenty-five years. And it is likely to be the last.

The book brings together shorter travel writings from journeys that Bouvier undertook in the 1970’s, 80’s and 90’s: a mid-winter visit to the Aran Isles; a wander around the Lowlands of Scotland, and rugged Islay. Xian, China and South Korea make appearances, too. And the closing essay tells a tale from the author’s childhood in Switzerland.

It’s a wonderful collection, filled with imagery of great subtlety and originality, the sort that had me turning down the corners of pages over and over to mark a passage, or stopping to read a section aloud.

“This morning I left the city like a bed in which I hadn’t really slept,” he writes, as he abandons Edinburgh for Scotland’s misty lowlands.

In another story, he finds himself surrounded by trees, “in a constant state of dendrological intoxication”.

In another, he takes a room in a hotel, where, “the bed was as damp as a layer of mushrooms”.

And in Korea, hikes up a dormant volcano while reflecting on “these little volcanic lakes nestling in a landscape like a felt hat dented by a fist”.

So It Goes is everything you could hope for in a collection by Bouvier — except more Bouvier.

I can only hope that someone will translate his biography, as well as any remaining fragments that dripped from his pen.

As I closed the page on that last story — a tale of the eight-year-old writer’s campaign to overcome his tyrannical arch-nemesis, the Prussian housekeeper, Bertha — I was yanked from the tale with a sense of disappointment, wishing it would go on and on. It felt like he was just getting started.

Get your copy of So It Goes — and Nicolas Bouvier’s other books — from Eland today.