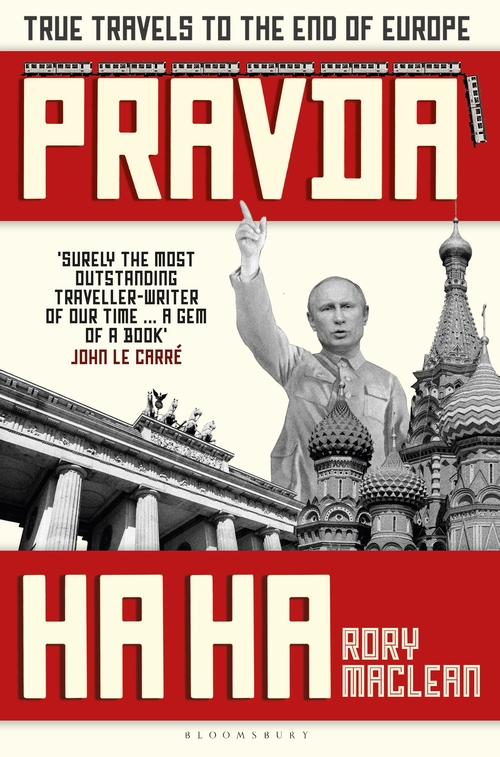 Where were you when the Berlin Wall fell on November 9, 1989?

I was sitting in the back room of our old house watching music videos on TV.

We didn’t have the specialty channels back then, but the cable company was running a free promo all week, and we could watch the movie channel and the music channel for free.

I was 17 years old, and glued to MuchMusic — the Canadian version of MTV — when the video stream of shoegazer rock was suddenly replaced by images of people kicking down Europe’s most oppressive border.

I don’t even think I could have placed Berlin on a map back then. But I knew something in my childhood had changed irrevocably. The Cold War that had projected oppressive nightmares into our lives was coming to an end. The world of 99 Red Balloons was all we’d ever known.

An entire new world of travel also opened to the West when that Wall came down, and as Eastern Europeans fled the prison their countries had become, the writer Rory Maclean went the other way.

He set out in a farting Trabant — East Germany’s two-stroke cardboard car — on a journey through Europe’s forgotten half, from Berlin to Moscow, through Czechoslovakia, Hungary, Poland and Romania.

He met people who hadn’t spoken to a foreigner for 50 years. And he came away with stories of optimism, freedom from fear, and most of all, hope for a new united Europe. That journey became his book Stalin’s Nose.

With Pravda Ha Ha, Maclean has now retraced that journey — in reverse — 30 years later to get a sense of why the hope of those years has come to nothing.

How did we go from Winds of Change to Brexit? From Eastern Europe’s first free elections in half a century to Russian troll factories, populism and Donald Trump? Were we just naive?

Pravda Ha Ha is a beautifully written book — in my opinion, the author’s best so far.

Maclean perfectly captures the sense of purposeless and malaise felt by the people of the countries he travels through.

In Russia, he meets a Chicken Tsar whose cynicism was fuelled by feelings of betrayal towards communism, and by betrayal towards the promise of capitalism, which after the collapse of the Soviet Union plunged Russia into a free-for-all of organized crime, hyper-materialism, and anarchy that resulted in the rise of Putin.

He travels to the Baltic state of Estonia, where fears of a Russian invasion never went away. In the breakaway Modovan republic of Transnistria he finds the opposite: a longing for the glory days of the USSR.

He meets students in the Ukraine who turn to performance art to process the trauma of their ongoing war with Russia. He sees authoritarianism on the rise in Poland and Hungary, where citizens have turned to populist leaders to deliver the sense of national pride they never found in an opaque, decentralized European Union which, all too often, seemed to push new German values on everyone else.

And throughout a content that experienced two World Wars, the Holocaust, and Cold War Communist police states, he finds a growing surge of xenophobia and populist nationalism, sparked in part by Europe’s inability to deal with the migrant crisis.

Pravda Ha Ha feels like an older, wiser book from an older, wiser writer. It contains the magic of great travel writing. It takes us places, and it brings us the voices and stories of real people.

We share their tarnished hope for what remains of a borderless continent, and we share their sense of an exhausted continent struggling for purpose in a world where the values that brought down the Wall don’t seem to matter to a generation of so-called ‘social justice warriors’ who can’t understand why capitalism was a more humane alternative to the Marxist hell of the gulag and the murderous hypocrisy of five year plans.

The Berlin Wall fell 30 years ago this Saturday, and there are a lot of events happening here in the city.

As darkness falls across Poland and Hungary, and Russia works to undermine the Western world, it’s a good time to think about what we’ve gained over the past 30 years of peace in Europe — and what we stand to lose.