We talked about ‘spirit of place’ in my last blog — locations and landscapes that hold an almost mystical resonance for each of us. We connect to such places on a deep level. They feel intimately familiar even when visiting for the first time.

But we also carry the landscape of our childhood with us, and that shapes how we experience other places.

My life was oriented around the St. Lawrence River. But the river didn’t just exist in the background. It defined the concept.

Surely all rivers were two and a half kilometres wide? I found it inconceivable that something I could throw a stone across might be a river, too. Until I studied geography, I thought those others were just streams.

The St. Lawrence also determined direction. We didn’t have north or south in my town. ‘Away from the river’ or ‘towards the river’ were just as real as ‘towards Kingston or Montreal’.

The river influenced the temperature, too. Even when those humid Ontario nights of heavy air and violent thunderstorms were at their most oppressive, the St. Lawrence could always be counted on for a breath of breeze.

I remember how odd it felt going to villages twenty minutes ‘inland’ to visit friends. The countryside felt much hotter in summer without that freshwater air, and so strange and flat and disorienting without the river running through it.

That freshwater smell was always in my background, growing up.

Some of my earliest summer memories are of trudging three blocks west on Henry Street, reeking of Coppertone under a cruel sun. We turned left on St. Lawrence Street and ducked into the Beckers on the corner of King to buy freezies before claiming a place near the narrow sand patch of Kelly’s Bay.

I loved to stick my head underwater to listen to the thrum of an approaching Laker. And when it passed by, all us kids who had never seen the sea had the thrill of riding those brief ‘ship’s waves’.

I shunned Kelly’s beach when I got older and went through a skin diving phase; that’s what they called it long before the invention of ‘snorkelling’. That summer was spent with a mask and fins, exploring the river floor around the boat ramp, and near the water filtration plant that used to be a power station.

When we weren’t searching underwater valleys for old fishing lures, we’d go to a spot in Centennial Park just over from the beach, where the moss-covered wooden pilings of an old dock vanished into the gloom, and grab a big rock and jump in, plummeting straight to the bottom for a quick look around.

Some of my earliest St Lawrence memories are of North Channel. When my dad spent summer Saturday’s drinking Molson’s beer from stubby bottles at Lee Gilson’s, I explored derelict boats at the old Simjack Marine dock with the Americans from the cottage next door. And sometimes I paddled across the bay to Spencer Island, where a farmer kept Clydesdale horses. I liked to explore the island’s interior on my own while dad fished the shore.

We fished a lot in later years, too. The opening weekend of bass season in the St. Lawrence usually fell on my birthday. I understood why dad was never around for my childhood parties when I became old enough to go out in the boat. From then on, June was marked by bass fishing with my father and Bruce and Paul, in the shallows between islands, and in the fast water chute we called The Gut that swept between Prison Island and the unnamed American island beside it.

Later, in high school, I would venture out to those same islands with Rob Wilson in a borrowed canoe. Rob would eventually develop a gear fetish that made him easy prey for every crap gadget the guy at the Army Surplus Store tried to sell us. But before he took the fatal plunge by purchasing a collapsible grill, we went through a hardcore camping phase where we canoed to one of the islands — all of which were uninhabited — with a hatchet, groundsheet, and a tin of baked beans, and built unstable lean-to’s from sticks. It was something to huddle beneath in the dark after the fire went out, as we were silently consumed by mosquitos, each alone in his grim stoicism.

One summer I spent a week with my Brockville cousins, and got to know a new stretch of the river. Kevin and Steven were around my age, and their father owned a boat. We spent entire days cruising around the Thousand Islands, stopping to free the propeller from seaweed, and pulling in at random islands for a picnic and a swim.

They had a big house just outside town, on Sherwood Springs Road, and they’d built a cool fort at the edge of the woods that abutted their yard. Me and Steve decided to camp out in it one night that summer. The evening got off to a good start, until I grew scared and went back to the house. Their parents had taken us to see Ghostbusters that day at the Parkdale and I was imagining glowing eyes in the cracks between the boards where the woods came in. But I was only 11 or 12, and I wasn’t afraid of ghosts after that.

You can see some hometown St. Lawrence images in this video by my friend Dan.

Each season on the St. Lawrence holds so many memories for me.

I loved to venture out on the river during hot summer days, and to walk by it late at night, listening to the water lap shoreline stones.

It reminds me so much of one subzero winter night in the suburbs of Montreal, trudging through Pointe-Claire with my cousin Pat, carrying a two four of beer between us. I must have been around 14. Pat was a couple years older than me, and he was having girl trouble, but a few beers by the river would sort that out.

I sought out the river when I was having girl trouble, too. One hot summer when I was 15 I would go to Centennial Park late at night with my girlfriend because it was deserted and we needed a place to make out. At 15 our blood was as hot as those summer nights, and uncontrollable urges sat as heavy as the humid air that was smothering us.

Last time I visited Canada, I drove to World of Maps in Ottawa to pick up a topographical map of my stretch of the St. Lawrence so I could remember the names of those islands, and take memory trips from my desk in Berlin.

I still can’t hear the sound of a helicopter without picturing the Coast Guard helicopter warming up. I would watch it from my bedroom window, where I could just see it clearing the old trees that lined James Street as it lifted into the sky over a patch of glimpsed river blue.

It’s funny how images like that stay with you. 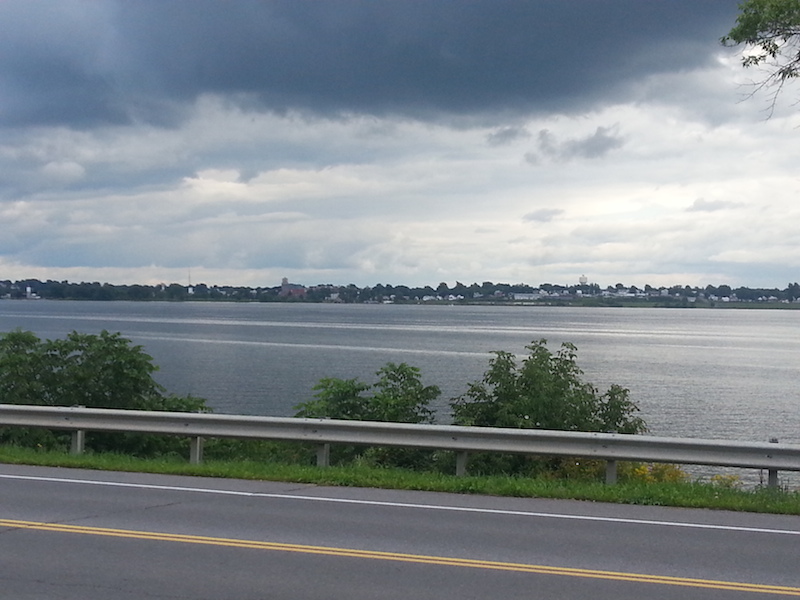