The largest Red Army base outside the Soviet Union was a 40 minute drive south of Berlin.

It was just beyond where the new airport — and the old Schönefeld SXF — is today.

Wünsdorf-Waldstadt was completely off limits to East Germans during those long, dark Iron Curtain years. They called it Die Verbotene Stadt (the Forbidden City). Others called the massive base ‘Little Moscow’, and I guess it sort of was.

Some 60,000 Russian soldiers lived there, many with their families. They had their own shops and schools, and a daily train service connecting them to ‘old’ Moscow.

There’s still a town on the site today. But it’s a strange post-apocalyptic sort of place, with fenced off sections of abandoned buildings — some being swallowed by forest — next to refurbished buildings, and even new homes. 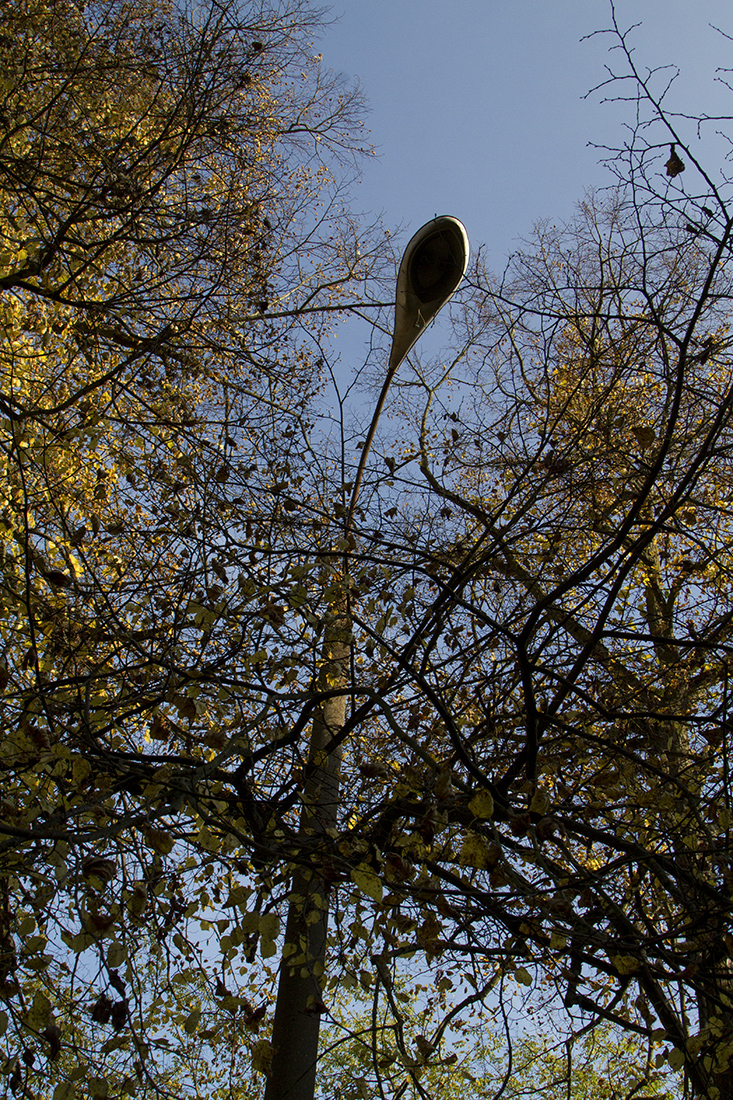 It feels as though a struggle is being waged at glacial speeds to reclaim useable structures from the past, while the past remains determined to rot at its own pace, whispering its story as it fades away.

There were military facilities in Wünsdorf-Waldstadt long before the Soviets showed up with their Lenin statue and their murderous Marxist ideology.

When the Red Army occupied large parts of Germany and Berlin at the end of World War Two, they took over surviving Nazi buildings and put them to use, just as the Allies had in their zones.

There was a Prussian shooting range on the site as far back as 1871.

The area was already Europe’s largest military base — some 60,000 acres — by the beginning of World War One, hosting an infantry school, among other facilities.

It also housed prisoners of war, some of whom attended Germany’s first mosque, a wooden building that was pulled down sometime after 1924 when it became too decrepit to use. You’ll find a sign marking its former location, right next to some reconditioned post-Soviet buildings that are being used as a reception centre for migrants.

After the war, the Army Sports School moved in. They stuck around until 1943, and during their tenure they hosted the German Olympic Team as they trained up for the 1936 games in Berlin.

Later, under the Nazis, the base became home to the Third Panzer Division of the Wehrmact, with barracks buildings, the army driving school, and a factory to repair tanks. The abandoned shell of the tank repair works is still there today.

There were several bombproof bunkers too, which you can visit on a tour (we didn’t).

The German Army’s Supreme High Command moved in before the invasion of Poland, and Wünsdorf remained a key command centre until the end of the war.

And then the Red Army showed up on 20 April 1945 and took over what was left — apparently without a fight. 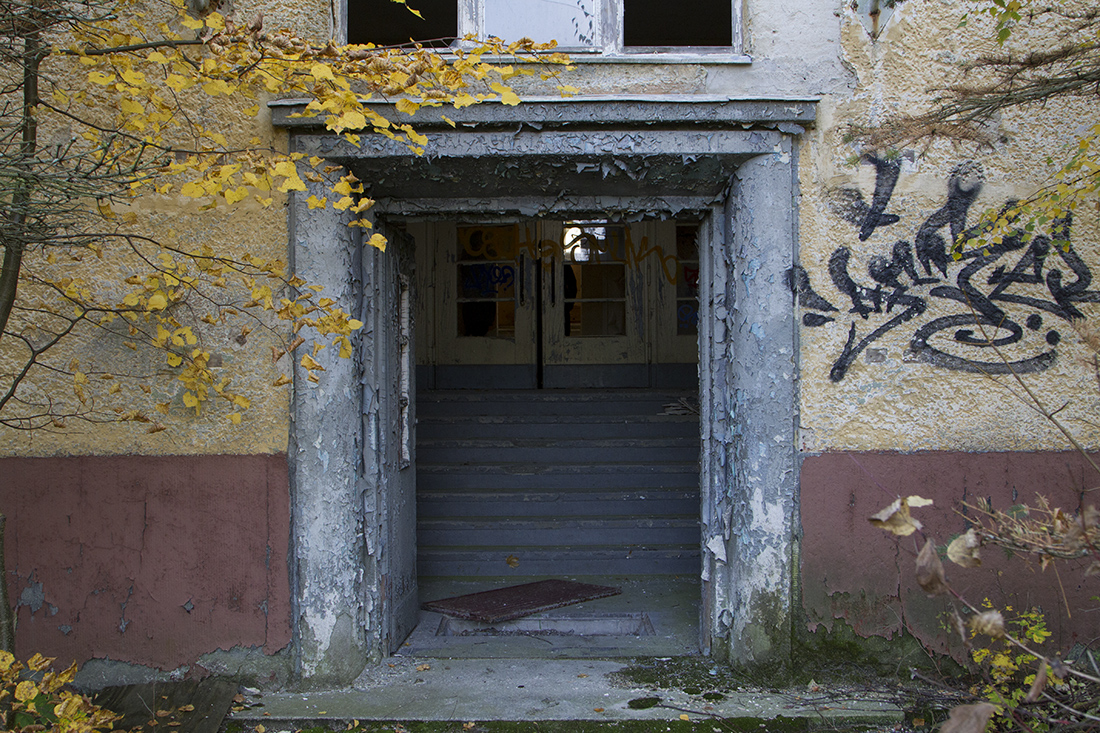 They began by providing their East Germany comrades with military muscle to secure the 155-km border around West Berlin.

West Berlin was a metaphorical island back then — walled off with troops, and from 1961 with concrete — surrounded by the DDR, and linked to West Germany by narrow road and air corridors.

Those soldiers proved their worth when Soviet tanks put an end to the 17 June 1953 uprising.

What began as a demonstration by disgruntled East Berlin workers against the DDR’s production quotas quickly blazed into a wave of protests and strikes against the East German government and the Socialist Unity Party.

Martial law was declared in East Berlin and the Soviet tanks rolled in, opening fire on ‘insurgents’, and in some cases shooting directly into the crowd. They managed to hammer the lid back on the anger that had boiled over, and Stasi and police reprisals kept it in place with intimidation and random beatings.

The Communists weren’t going anywhere, and neither were the Russians. By 1971, Wünsdorf was also the headquarters of the Soviet 16th Air Army. 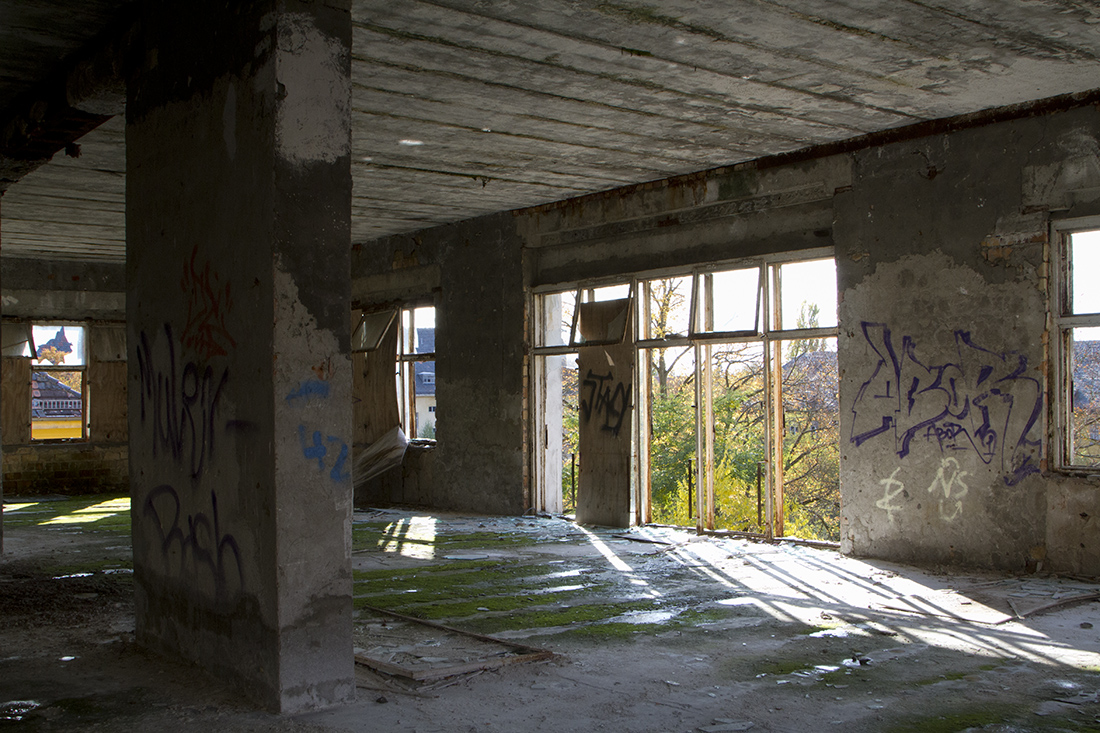 And then the Berlin Wall fell in 1989, and it all gradually came to an end. The last Russian soldiers left in September 1994, taking everything with them that wasn’t nailed down.

Of course, they left their rubbish behind, just as they had in so many other abandoned bases I’ve explored, from Slovakia to Lithuania and Latvia. In this case, nearly 100,000 rounds of ammunition and some 45,000 cubic metres of trash, with the usual toxic chemicals thrown in.

They weren’t exactly the most environmentally-friendly military, the Soviets. Especially not in other people’s countries.

The only thing left in Wünsdorf today is the forlorn empty shells of buildings. There sure isn’t any shortage of those.

We walked for kilometres down roadways lined with occasional ruined buildings before deciding to slip inside a large cluster of six five-storey blocks grouped around an overgrown courtyard. 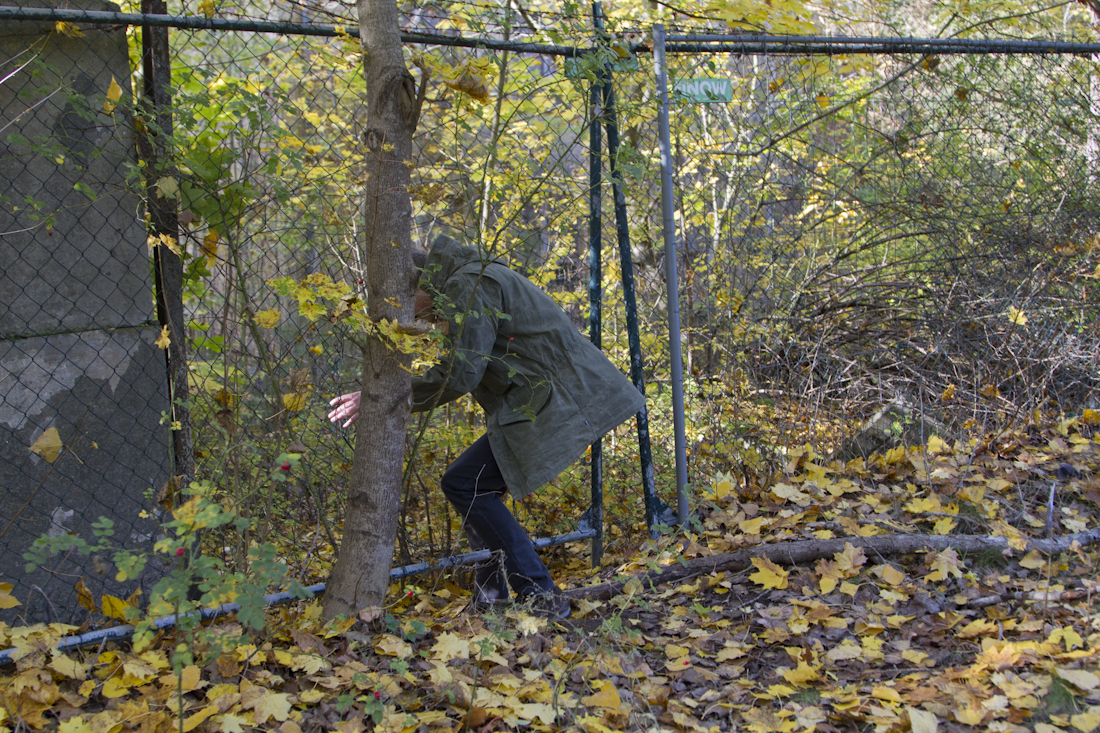 We didn’t even have to risk our trousers on a crotch-piercing climb thanks to a helpful gap in the fence.

The buildings we explored reminded me of abandoned schools, with long institutional corridors and room after room opening off of them. Some had been sprayed with graffiti accented by a scattering of empty food and drink packages, while others contained little more than the sharp crunch of broken glass.

The top floor of one building was stencilled with painted street signs and markings, remnants perhaps of the army driving school, though it looked more like a driving course for children using pedal-powered cars.

As we walked between buildings across an overgrown patch of greenery that had once been a square, Stefan found signs of wild boar rooting for food in the earth.

Many of the better preserved structures have been converted into modern housing, and I briefly proposed doing the same with one of the blocks we explored. 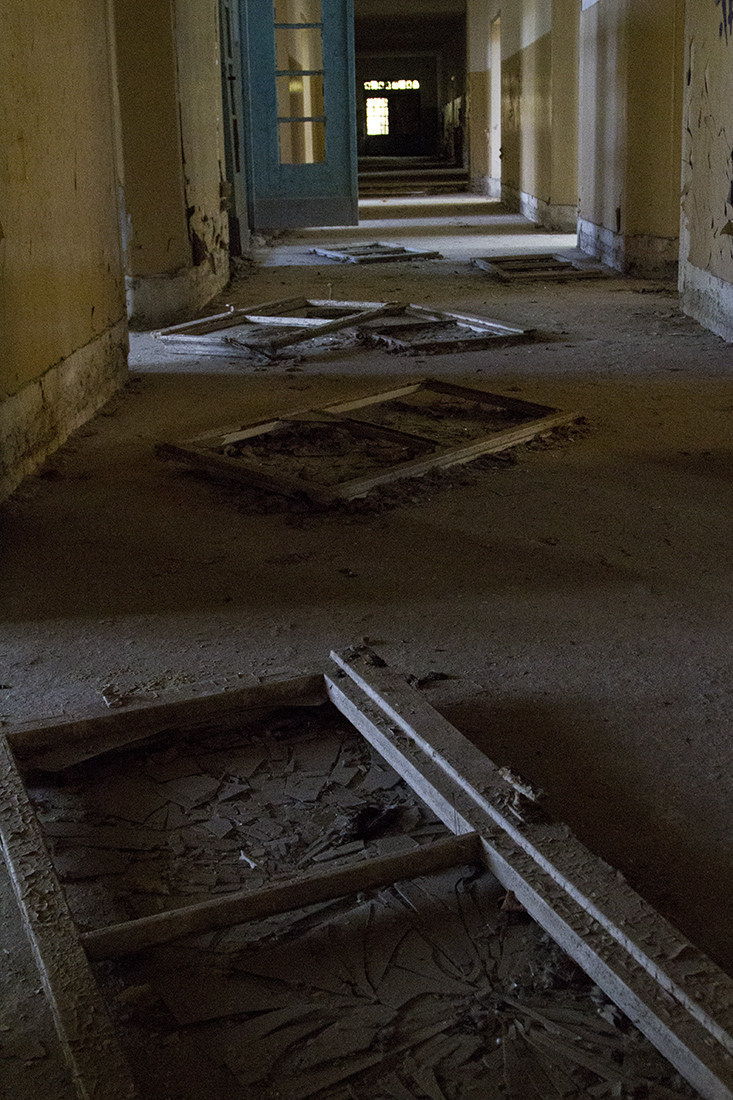 I thought we could probably get a good price on a five-storey fixer upper with dozens and dozens of rooms. Something we could renovate with bookshelves and secret passageways, with fresh walls and nasty ‘verboten’ signs in German to keep the riff raff out. But Tomoko didn’t even want to discuss it. She just walked away. 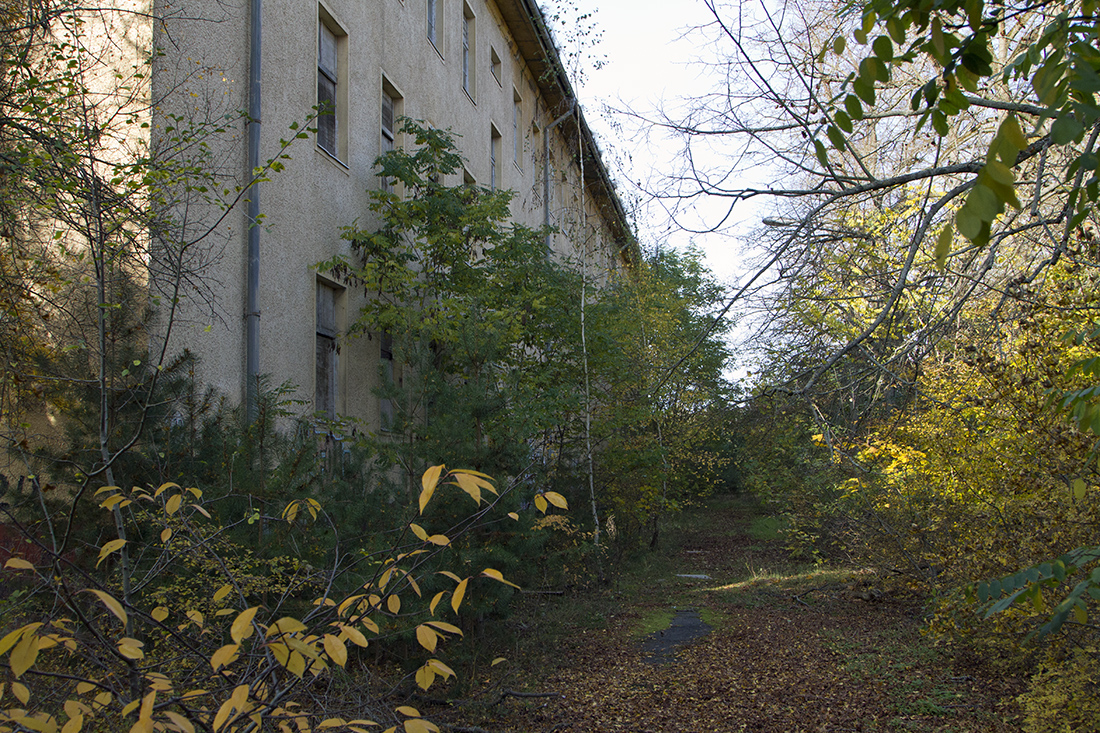 We would have to walk away soon, too, for coffee and ice cream before making the drive back to Berlin.

In the end, we barely scratched the surface of this city-sized site that in its prime housed 16 times more people than my entire hometown.

Driving down there that sunny Sunday with our neighbour also reminded me that, in many ways, Berlin is still an island today.

I’ve never explored the surrounding countryside of Brandenburg because we don’t own a car. When we rent one, it’s usually to drive straight up to the Baltic coast 3 hours north.

Unlike other big European cities, the German capital isn’t part of a larger urban sprawl.

Where Dusseldorf has Dortmund and Cologne, Essen and Bonn, and Amsterdam is a few stops away from The Hague and Rotterdam, the nearest major city within driving distance of Berlin is, what… Warsaw? Prague? Even Munich is 6 hours by high speed train.

Berlin is an island on the eastern edge of Germany, surrounded by the forests and farms of the Great European Plain.

It’s a good landscape for moving large concentrations of troops and armour, which made it a good forward base for the Red Army — the only one outside the former USSR.

You can read more about this fascinating Cold War relic — and see photos of the buildings we couldn’t get into, including the swimming pool, theatre and lichen-encrusted statue of Lenin — on the excellent Abandoned Berlin website. 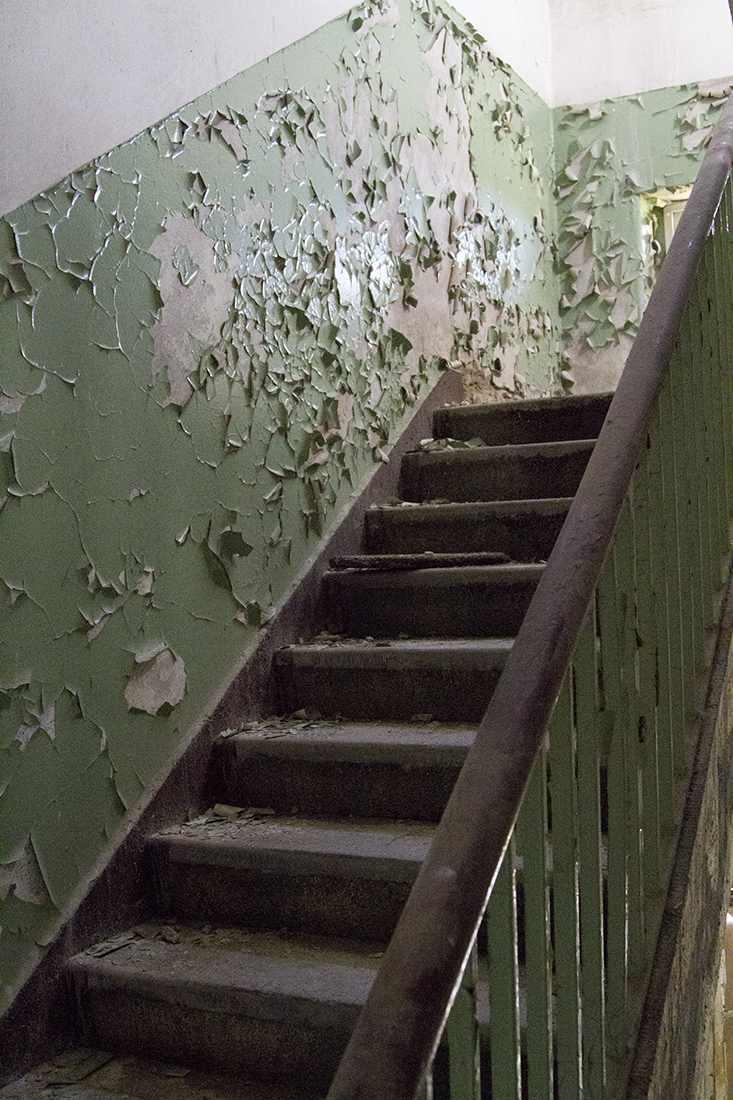