How big is your head?

I’m not suggesting you know its exact circumference in centimetres, but you do have an idea of how much space it takes up, right?

I don’t think this is the case for German people. How else would you explain their pillows?

The sleep-deprived foreigner has two choice of pillow here in Germany, and each is terrible in its own way.

The most common type is the pointlessly huge square pillow: 80cmx80cm and pathetically thin. I hate them.

I’ve devoted a considerable amount of time to thinking about those giant square pillows but I confess I’m completely unable to imagine how you’re supposed to sleep on it.

Prop one under your head like a normal pillow and you’ll find 70% lying there uselessly with no head resting on it. That method can’t be right. Not unless German efficiency is a myth.

Try sleeping with your head in the middle and you’ll find half the pillow wedged beneath your shoulders, completely defeating a pillow’s purpose (Hint: it’s supposed to prop up your head).

The only hope you have of transforming a giant square wafer into the thickness of a normal pillow is to fold it up 83 times — and good luck keeping it that way all night.

No, these things are the world’s worst pillow, second only to the wooden blocks the Japanese slept on in the Warring States period. 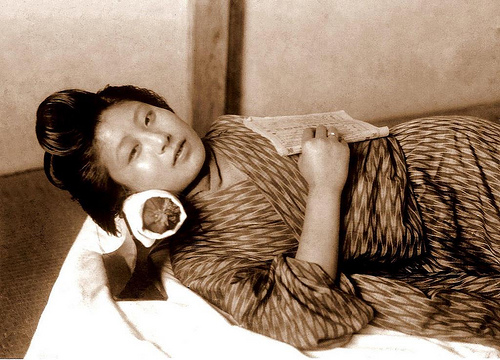 There is another option in Germany, a sort of 40cm x 80cm rectangular half pillow. It does fit beneath your melon without elevating your shoulders, but given that it deflates to the thickness of a handkerchief the moment you ‘rest’ your head on it, it’s hardly an improvement.

I’m not the only one who feels this way. Here’s a random sample of expats on the ToyTownGermany forum:

“Pillows in Germany are cr*p. Huge bags of nothing. Don’t expect any support for you head from them.” – Sleepless in Munich

“The pillows here are horrible. It’s a top 10 ‘most hated differences’ for me.” – Dolfan

“i would buy pillows before coming here, they are sometimes bigger but they are not nearly as fluffy. i hate them actually” – Fromageball

“Why on earth are the German pillows so big!! I like the idea mentioned by Osmacher that they’re designed for sleeping cats, but somehow I don’t think that explains it.” – ValleyGirl

“Technique for using German pillows successfully is to buy four (4), roll them up very tightly and then insert them carefully side by side into a normal size UK/US pillow case.” – Thetrotter

“I see lidl are selling a myriad of poxy square pillows next week so i typed “what the fuck are you supposed to do with square pillows” into google, and came to this thread. After 13 years in Germany, I still don’t know how or why they have square pillows.” – Exquitius

“I am still searching for the perfect pillow.” – Marshal

Sadly, they don’t even seem to be benefitting the Germans.

A 2012 article in the Frankfurter Rundschau daily reported that young Germans are not getting enough sleep. In a survey of almost 9,000 people aged between 16 and 25, more than half said they didn’t feel rested during the day, and 70 percent told researchers they would like to sleep more.

I think we know why.

Only a giraffe could use one of those square sleep thieves without suffering acute spinal discomfort.

Believe it or not, the beds are even worse.

Here’s a word of warning for you if you’re traveling to Germany: you will not end up with the bed you thought you reserved.

What at first glance appears to be a big bed for two people will in fact be two single beds shoved together.

You won’t be sharing a blanket, either. Instead, you’ll find two single duvets folded on top of it, one for each person.

I suspect this is a holdover from Puritan times when sex was for procreation rather than recreation, and even then, enjoying it remained a borderline sin.

Two-beds-shoved-together is a step away from separate rooms, or the single beds couples used to sleep on in 1950’s sitcoms. It’s impossible to spoon, cuddle, or otherwise boink on them — at least, not with any comfort.

Should you desire to meet in the middle, one person is doomed to fall into the cavern between mattresses. And those two single duvets will inevitably separate during the night as gravity draws them to the floor on either side, leaving you with a very cold bare bum.

It’s no wonder birthrates are falling here. You either have to cram together on one single mattress, or invite one another over for a bit of fun before retiring to your separate mattress for the night.

Anyway, to quote Rick Springfield, the point is probably moot. Your humble narrator is not the sort of person to put up with that for very long.

I bought the biggest bed I could find at Ikea — roughly the equivalent of king sized — and used the sheets and duvet I’d brought from Malta.

And I bought a proper pillow in Canada the next time I visited home. I put it in the dry bag I use for my sleeping bag when camping. That way I could squish all the air out so it fit in one side of my suitcase, leaving plenty of space for Irish tea and Wiser’s rye.

In the next blog in this series on culture clashes, I’ll tell you why I should have brought some medicine back with me, too.