Every once in a while a book comes along that shakes up your perspective, and provides deep insights into your past and present.

This is one of those books.

Blue Truth by David Deida showed up out of nowhere, at a time when I’d been struggling with a sense of stagnancy in my craft, and with the path I’ve chosen through life.

It shone a fresh light on past experiences, deep hurts and traumas that I’d been unsuccessfully trying to figure out. And it points the way to new depth in my work and life, if I’m brave enough to dig into the sore spots and bleed it out on the page. 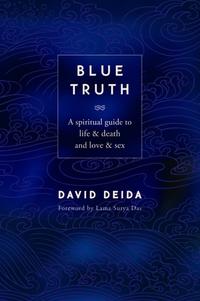 It’s the sort of book you read with a big knot in your stomach — and sometimes a choked feeling of nausea in your throat — because the stuff it’s pointing to is so viscerally true.

The author draws on some of the most practical aspects of Buddhist philosophy, but this is not a “new age” book.

Now there’s a phrase I find it difficult to utter without puking in my mouth. I went down that path in my early twenties, at the peak of my martial art days — sometimes to what I now see as an embarrassing extent. Sure, I found some interesting insights. But I also found a lot of total nonsense: elaborate theologies of dubious moral value, unsupported by any evidence. And I bought into it. I guess because I was young, and I wanted something cool and unusual to believe in.

But the world could use a lot less conga drums and “singing bowls” — and we could certainly do without music that sounds like three dogs piddling in a tin. Shit like that is a distraction. It’s noise. And let’s be honest, it’s usually a lot of talentless people playing uncomplicated instruments very badly.

I distrust anything that carries the label of “spiritual,” and I don’t subscribe to any religion. There’s no fluff or overblown theories about afterlives or pantheons of gods in Blue Truth. This stuff applies very much in the Now.

The author uses some rather eloquent and poetic writing to describe straightforward ideas that have often gone over my head in obscure Eastern texts. And Deida gives possibly the best description of what it means to live in the present moment than anything I’ve seen in Eastern philosophy, Zen, or the martial arts.

As a memory-obsessed writer I spend a lot of time living in the past — and living from my past. But the Now is all we have. And if we don’t hang out there, our lives just slip away.

This is definitely not a book for everyone. I don’t even think it would have been a book for me if I had picked it up 6 months ago.

But like everything exciting and new that I encounter, I want to pass it along to you, my faithful readers and internet coffee time companions. Because at least a few of you out there will be waiting for it.

What this book does contain is practical deep truths capable of kicking holes in your most closely held illusions — if you’re honest enough to reflect on them and take action.